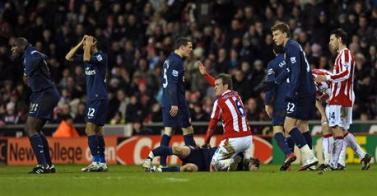 There’s a blog – Arseblog – if you’re interested, and this is what the writer had to say about the dreadful injury to Arsenal’s Aaron Ramsey on Saturday. I couldn’t agree more – and just as an aside I think the Sky and SuperSport commentators are pathetic.

May 1st 2006 – Abou Diaby has his ankle fractured and dislocated by a challenge from Dan Smith.

Feb 23rd 2008 – Eduardo has his left fibula fractured and sustains an open dislocation of his ankle joint after Martin Taylor’s tackle.

Feb 27th 2010 – Aaron Ramsey has his fibula and tibia broken, his leg left hanging in the air, by Ryan Shawcross.

Arsenal captain Cesc Fabregas said immediately after the game:
“In five years I’ve seen three of them, Abou, Edu and now Aaron. What can I say? It’s difficult.”

I love Cesc but he’s wrong. It’s not five years. It’s less than four years. These kinds of horror injuries can happen in football. It’s a physical sport and such injuries are thankfully rare but they do happen. However, I have never in all my years known one club to suffer three of these potentially career ending injuries, let alone in such a short period of time.

Is it just coincidence? Arsene Wenger said afterwards he doesn’t believe in coincidence and I’m with him 100% on this one. I believe that these three injuries are a direct consequence of the ‘Arsenal don’t like it up ’em’ ethos which has become conventional wisdom in recent years. ‘They don’t like being kicked’, the implication that the wimpy foreigners can’t take it. And it has been peddled across the football world by reporters, TV pundits, radio commentators, Sky Sports presenters and anyone else you can think of. ‘Arsenal don’t like it up ’em’, as if Arsenal were somehow unique in this. Let me tell you, nobody likes it ‘up em’.

No other club has suffered three horrendous injuries like this in the last four years. My honest opinion is that the belief that it’s ok to be overly physical with Arsenal because, surprise surprise, they don’t like it, is the root cause. If I had to trace it back I think it’d probably start with Sam Allardyce.

Before I go on, I’ll make this point : I don’t think any of the players who carried out these tackles wanted to break another professional’s leg. And in that I’m giving Dan Smith the serious benefit of the doubt because his tackle was by far the worst, well late and I think a bit nasty. Even still I don’t think he intended to do that kind of damage. Now, let me address the people who say “Well, he’s is not that kind of player’.

Unless the person in question is an actual psychopath of course they’re not that kind of player. It goes without saying. Nevertheless they’ve been told to go out there and get stuck in and give Arsenal a bit extra because, as we all know, they don’t like it up ’em. So you have Dan Smith’s snide tackle, Martin Taylor’s ‘reducer’ and last night Shawcross’s reckless hack at Aaron Ramsey. Did he mean to break his leg? Of course not. Did he want to? No, of course not. The bottom line though is that he did. I feel his tackle was absolutely reckless. Watch it again if you can. At this level of the professional game it was a horrendous challenge.

If I can liken to it something else it’s speeding. The young guy in his car who goes out, thinking he’s Johnny Invincible, until he careers around a corner too fast and mows down a child. He didn’t mean to, but he did it, and he is responsible. “I didn’t meant to run the kid over” and “He’s not that kind of driver” aren’t acceptable excuses in a courtroom so spare me the mealy-mouthed crap over Shawcross (who has previous – Stoke Sentinel, Oct 2007). He looked distraught but his tears don’t matter. What matters is that a talented young footballer has been the victim of a ridiculous tackle and his leg is broken in pieces.

We know Aaron is going to get the best possible medical care and all we can do is wish the best for him as his career takes an unexpected and horrific diversion. We’ve seen the impact of these injuries, the fallout is not pretty, and he is probably going to have to battle the same niggles that Eduardo and Diaby have to struggle against all the time. The physical damage is tremendous, not just the broken leg but try to redevelop the muscle and everything else, but so too is the mental damage. Thankfully he’s got two guys who can show him the way, who can help through when things get really difficult and when it’s time to come back they can help him cross the white line again without fear.

But how heartbreaking is it that we have those two players? I will admit to being rather emotional watching that game last night. It was obvious from the first instant what had happened and I felt sick for Aaron Ramsey. A kid of 19. It leaves you angry. And angrier because this is not the first time it has happened to Arsenal. Nor the second. But the third inside four years and quite frankly enough is enough.

Immediately afterwards on Sky we had Richard Keys and Andy Gray making excuses. “Is it because Arsenal are too quick?”, said Keys No! It’s not because we’re too quick, it’s because we’ve been on the receiving end of some obscene tackles. “Sometimes you have to play them like that”, said Gray, referring to the fact that Arsenal don’t like it up ’em. Well, he’s the thing – as far as I’m concerned, Andy Gray, Richard Keys, the rest of those utter c***s at Sky, and anyone else who has helped perpetrate that myth over the years is in some way culpable for the fact that Aaron Ramsey had his leg busted like a twig last night. They have gone on and on and on about it and this, ladies and gentlemen, is what happens.”