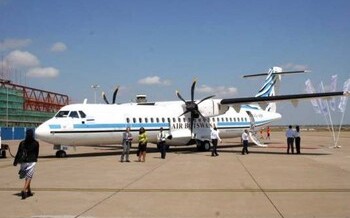 This from Zambia Watchdog

Air Botswana is set to introduce Lusaka, Zambia as its third destination in August, as the airline moves to make its mark in the region’s airspace. Though officials at the country’s airline were not forthcoming with information save to confirm the latest developments, according to its in-flight magazine, the deal has been sealed and if all goes accordingly come August, Air Botswana will be landing at the Lusaka international airport.

An agent has reportedly been appointed to take care of Air Botswana’s business in the Zambian capital. Flights will run four days a week with two of them being direct while others will have a stop over in Kasane. Kasane is a strategic location. Six kilometres east of Kasane is Kazungula, which serves as the border post between Botswana and Zimbabwe and the landing for the Kazungula Ferry between Botswana and Zambia.

(Kazungula is, of course, less than 1 hour’s drive from Livingstone – ed)