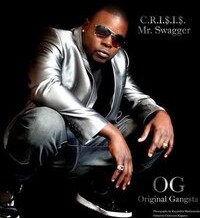 George da Soulchild, co-presenter of The Chanters Lodge Experience with The Milli Jam Ingredient, our weekly Sunday night radio show on 107.7 fm in Livingstone, updates us weekly on the Zambian music scene:-

“Zambian Hip-Hop artist Chisenga Katongo, also known as C.R.I.$.I.$ Mr Swagger, has been nominated for the BEFFTA Awards to take place at the Georgia World Congress Center in Atlanta next month.

The Black Entertainment, Film, Fashion, Television & Arts Awards, is a prestigious international event and a distinctly special awards ceremony, honouring the best entertainment and showbiz personalities in the black community in the UK, USA and globally.

“Eventual winners of the awards will be decided by public/global vote, which will be carried out both online and also by sms. Each nominee will be given a nominee number for sms voting and also a link for online voting, which the artist can give their fans for them to vote.”

And Chisenga, who is currently working on a new album (B.I.G), in an interview said he had been persistent in trying to keep his music international and as such he was happy to get the recognition. “My New Year has kicked off on a good note. For a long time, some people have tried to discourage me and told me that it’s impossible for my music to be recognised internationally, but I have been persistent with my dream and I am far from over”. He said.

“The nomination is a good sign of where things are going. Most recently, we also saw my song ‘The Fire Inside’ take the number 1 spot on Channel-O across Africa, despite some sceptics not recognising it here in Zambia. I’m quite happy with the way things are going and, being placed among other great artists is an honour in itself. The nomination means a lot to me and Zambian music. I thank the BEFFTA panel for being able to recognise my work. Above all, I thank God.”

The BEFFTA Awards were launched in London in October 2009. This year, the awards will debut in Atlanta on February 23 as an integral part of the African-American celebrations to commemorate Black History Month in the USA.