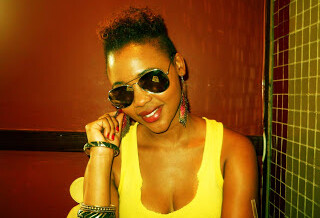 Thanks to Kaufela, co-host of our Sunday night radio show on Zambezi 107.7 fm, and Duncan Sodala, good friend and manager of Zambia’s famous Zonefam of ‘Sinjonjo’ fame who fill us is in about Cleo, one of Zambia’s participants in the latest edition of Big Brother Africa – The Chase. We wish her the best of luck!

“We had the chance to sit down with Cleo Ice Queen and this is what she had to say:-
There are two sides to me, one side is Ice Queen the other side is Cleo. Cleo is more of the sentimental person and Ice Queen is the business minded and often standoffish kind of person. I like to keep things professional when I am in a working environment. I remember being a performer as early as four years old, one of the first influences in my music was Bow Wow (they used to call me that in High School) – but I was also very drawn to the music of Mr.Tupac Shakur.

One of my first major achievements was winning the Rap For A Million while I was still in High School. When I had my daughter at twenty I would say she become a huge source of my inspiration, I became focused and now I want to leave a legacy by which to remember me. My Management Team Kamikazi Entertainment keep me grounded and hold me down all the time, I am working on something called “Kamikazi Woman” – which will be Women Empowerment through the use of Arts, Dance and Theatre. In 2013 I have collaborations lined up with Jaynamic (South Africa), JK (Zambia), Raydo (Digital X), Nana (XYZ), Salma Dodia and others…

One of the major highlights in 2012 for me was being nominated as one of the best female rappers in South Africa, even though I was not victorious – It gave me a platform to meet other artists and be exposed to a larger audience. The South African Industry has a lot of opportunities and I have not faced a lot of challenges being from Zambia and being female. I do get a lot of comparisons to Nicki Minaj but I just do me and continue to reinvent myself.

Another highlight of 2012 was recording on Tswa Daar remix for Khuli Chana. I met him at Mozboy Studio, we exchanged contacts and a while later he called me up and I recorded my final verse at Raw-X studios, all I can say is it was simply amazing and I thank him for putting me on.