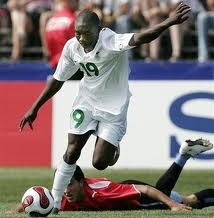 Zambian star Emmanuel Mayuka struck again for Young Boys this week, his 90th minute goal sealing the victory over 10-men St. Gallen by a score of 2-0. The goal, Mayuka’s 7th in the domestic league is second best on the team, three behind Cameroonian teammate Henri Bienvenu, and moved Young Boys into fourth place in the table. The loss for the home-side St. Gallen was their sixth in a row, and are winless in 10 matches.

Mayuka is a former player for hometown Kabwe Warriors. In early 2008, Mayuka was the youngest player at the Ghana 2008 African Cup of Nations and he made his competition debut against Sudan. In September, he joined Israel’s Maccabi Tel Aviv. In April 2010 Mayuka renewed his contract at Maccabi Tel Aviv until 2014.

On 28 May 2010, it was confirmed that Mayuka had signed a five year contract with Swiss club BSC Young Boys for a transfer fee of 1.7m $, paid to Maccabi Tel Aviv as the replacement for Seydou Doumbia, who was sold to CSKA Moscow. On 17 February 2011, Mayuka scored a last-minute goal against Russian club FC Zenit Saint Petersburg in a 1/32 final UEFA Europa League match to help his team to a 2:1 home win.

He was part of the class of 2007 under-20 which included Fwayo Tembo, Clifford Mulenga, Sebastian Mwansa, William Njovu, Stophira Sunzu, Joseph Zimba, Rogers Kola, Jacob Banda, Nyambe Mulenga and Dennis Banda. He was the youngest player at the 2007 FIFA U-20 World Cup and the only school boy in the team. Despite not scoring there, many soccer pundits and fans acknowledged his contribution to one of the finest youth squads in Zambian football history.

Mayuka was not part of the U-20s that participated earlier that year at the African Youth Cup in Congo (where Zambia finished fourth) but, in the first game against Jordan, he was picked in the starting lineup, and remained such for the other two group stage matches and the round-of-16 clash with Nigeria. Mayuka debuted for the senior side in the 2007 COSAFA Cup, scoring the second goal in a 3–0 rout of Mozambique.