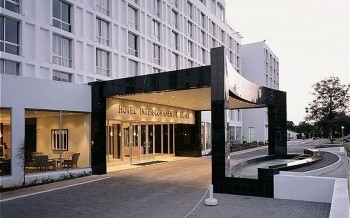 Here’s an interesting piece by Wendell Roelf that I saw on Reuters concerning the expected expansion of the hotel business in Africa. The picture is InterContinental in Lusaka.

Global hotel chains are poised to spend hundreds of millions of dollars in Africa over the next few years to meet increased demand from both international tourists and the continent’s own fast-emerging middle class. Africa was the only region in the world to show growth in tourism in 2009, according to the World Tourism Organisation. In 2010 international arrivals rose by 6 percent to 49 million, slower than Asia or the Americas but double the growth rate for Europe.

Industry executives say that as consumer spending stalls in developed markets, more multinationals are betting Africa’s growth will eventually translate into meaningful revenue — if they can negotiate the considerable regulatory and infrastructure challenges of doing business there. InterContinental Hotel Group, Accor, Starwood and Rezidor Hotel Group, the group that operates the Radisson Blu chain, are among those looking to capitalise on the continent’s urbanisation and build up its underdeveloped hotel industry.

“In the last 48 months we’ve added 33 hotels — some already opened and others under development — to the African continent,” Andrew McLachlan, Rezidor’s vice-president for business development Africa and Indian Ocean islands, told Reuters in an interview in Cape Town, one of the continent’s tourism hot spots. “If we don’t have any curve balls, we should open another eight hotels in 12 months across five countries,” he said, adding that almost all of developments were being undertaken by local owners.

Among the projects planned was a $40 million Radisson Blu upscale hotel in the Mozambican capital of Maputo and a 120-room 300 million rand ($42 million) lodge in South Africa’s Kruger National Park, expected to open in 2013.

“When looking for growth it’s only natural to look at Africa, (which is) not as badly affected by a slowdown. There is potential for higher growth for hotels here than in traditional markets,” said Martin Jansen van Vuuren, a director at consultancy Grant Thornton Strategic Solutions.

Sub-Saharan Africa’s economies are expected to grow at an average of 5.5 percent in 2011 and just under 6 percent in 2012, according to the IMF. While that’s still short of China’s blistering pace of expansion, it handily outpaces most of the developed world.

“We consider that there are a large number of capital cities in this continent where we either have no representation or insufficient, and if you ask me what my objective is for the next five years, it is to begin to redress that imbalance,” said Michael Cooper, InterContinental’s vice-president development for sub-Saharan Africa.

But expansion in the world’s poorest continent does not come easy. Many of the hotel developments come up against the ubiquitous challenges of infrastructure constraints, corruption and regulatory hurdles, which combine to cause higher costs and lengthy delays. In the Angolan capital of Luanda — the world’s most expensive city — Rezidor is expecting to import everything except cement for its flagship Radisson Blu, already delayed for 15 months after local authorities decided to build a road through the site after initial plans were agreed, McLachlan said.

“Sometimes, even when you are a city centre hotel, you’ve got to design your hotel as if it was on an island with your own water purification, sewage plant, and even generate your own electricity.”

Yup! That’s about it!