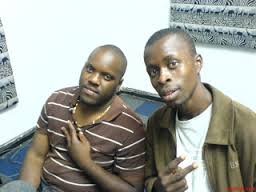 The information comes courtesy of George Kaufela and Chali Mulalami

K’millian (above left pictured when he appeared on our radio show) was born Leo Moyo. He studied computer science at a university in South Africa, after completing his higher education he decided to follow his heart instead, and venture into music. His career kicked off when he signed on to the Sling Beats music label. K’millian burst on the scene in 2003 with a self-titled album which yielded tracks like ‘Ule Ibukisha’ (with the late Crystal Shaun), ‘Nalyendele’, ‘Shalapo Naya’, ‘Niwe Weka’ and more.

In the coming years K’millian and the Sling Beats label went on to shape the landscape of Zambian R&B with 3 more albums namely “My Music”, yhe record breaking “Another Day” and “True Colors” which churned mega-hits such as ‘Nizakukonda’, ‘Kakabalika’, ‘Pa Ulendo’ and ‘Nikwisa Waya’ and more.

After a 2 album break from Sling Beats, K’millian is back with the legendary label and has already finished working on two unreleased albums. His seventh called ‘Timeless’ is meant for an international audience and the eighth a local market targeted album called ‘Home Again’. K’millian will this weekend 1st of June launch his home again album at Polo Grill backed by uncle Rex and a live band.