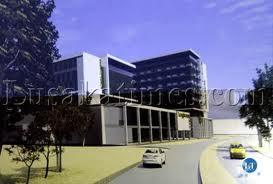 Government has approved a plan to re-develop Longacres Lodge in Lusaka into a five star hotel. Finance and National Planning Minister, Situmbeko Musokotwane said the development of the Longacres Lodge will start in the next six weeks and will be financed by Thukuka Zambia Limited, a South African company with its Zambian partners at a cost of US$35 million.

Mr Musokotwane said the project will be done under the Public Private Partnership (PPP) concept and will be run by a special purpose entity where the developer will be allowed to man the asset for a concession period of 20 years.

Dr. Musokotwane further stated that the developer will be paying Government US$32 million every year while Government will also maintain 15 percent shareholding in the asset until the concession period when it will completely take over.

He also disclosed that the developer will also pay all the employees at the lodge their benefits while those who wish to continue will be re-engaged by the same developer and also noted that the re-development of the lodge into a five star hotel will create an employment opportunity to hundreds of Zambians who will be employees in various capacities during the construction period.

The five star hotel will also house a shopping complex, offices and a spacious parking space.