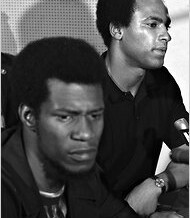 Mike Tabor, above left in the photo, died last week. He was a friend of mine. I knew Connie, his first wife, before I knew him. Connie was involved with the UN Institute for Nambia in Lusaka in the late 70’s early 80’s and Ridgeway Hotel, of which I was general manager, had the contract to cater for that institiution – feeding some 250 students daily as I recall. Later I met Mike and we became good friends through a mutual friendship with late Trevor Ford – the cartoonist ‘Yuss’ in the Post newspaper. Mike was one of the first DJ’s on Radio Mulungushi – Zambia’s first fm radio station allowed to play ‘Western music’ and Mike certainly knew his music. He will be sadly missed. Here’s his obituary from the New York Times

Michael Tabor, one of 13 Black Panther Party members acquitted in 1971 of conspiring to bomb public buildings and murder police officers in New York City, died on Oct. 17 in Lusaka, Zambia. He was 63. The cause was complications of several strokes, said Melvin McCray, a friend and an adjunct professor at the Columbia University Graduate School of Journalism who was producing a documentary about Mr. Tabor.

On May 13, 1971, Mr. Tabor and his co-defendants were found not guilty of all charges of planning to bomb department stores, police stations, train stations and the New York Botanical Garden in the Bronx and to murder police officers. Mr. Tabor, a captain in the New York branch of the Panthers, was not in State Supreme Court in Manhattan when the verdict was read. He and another defendant, Richard Moore, had fled to Algeria four months into the eight-month trial — one of the longest in New York history.

The prosecution’s case rested largely on the testimony of three undercover agents who said they had heard the defendants plan the bombings and killings and had attended classes where they were taught to shoot weapons and make bombs. In a verdict that came after two hours of deliberation, the jury foreman said, “Not guilty” 156 times.

The flight of Mr. Tabor and Mr. Moore came at a time of strife between the East and West Coast factions of the Panther Party. Huey P. Newton, its supreme commander, denounced the two men for abandoning their co-defendants. Mr. Tabor said they had left out of fear for their lives, not because of the trial.

“I am overjoyed that the brothers are free,” he said from Algiers. “I always said that the case was an attempted railroad and that the defendants’ rights were flagrantly violated.”

For a time, he and Mr. Moore were guests of the Algerian government, Mr. McCray said, but they were eventually expelled. Mr. Tabor and his first wife, Connie Mathews, who had been the party’s international coordinator, moved to Zambia in 1972. Mr. Tabor became a writer on politics and culture for numerous publications and a radio host in Zambia. “The old guard of African liberation movements respected him as a freedom fighter,” Mr. McCray said.

Born in Harlem on Dec. 13, 1946, Michael Aloysius Tabor was one of two children of Grace and Michael Tabor Sr. He joined the Panther Party when he was 19 and went by the name of a 19th-century Zulu king, Cetewayo.

Mr. Tabor, whose first wife died, is survived by his second wife, the former Priscilla Matanda; his sister, Lorraine Tabor; a daughter; and three sons.

“I often asked him if he would be interested in returning to the United States,” Mr. McCray said, “but he adamantly said he would remain in Africa.”

May his soul rest in peace.