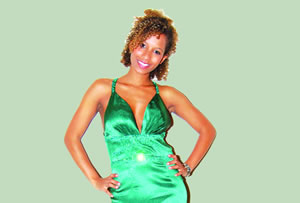 Following on from yesterday’s story about Anawana Haloba nominated for an important art award in Norway here’s a story from The Post about more nominations for Zambia.

Reigning Miss Zambia UK, Andella Chileshe Matthews (above) has been nominated ‘best beauty queen’ in the Black Entertainment, Fashion, Film & Television Awards (BEFFTAs) to be held at London’s Hilton Metropole on October 17. According to a statement by Justina Mutale, chief executive officer of Perryfield Promotions, the organisers of Miss Zambia UK Beauty Pageant, the BEFFTA Awards is an international prestigious ceremony committed to recognising the all-around accomplishments of black stars.

“We would be dedicating the BEFFTA Award to all the contestants who have ever participated in the Miss Zambia UK Beauty Pageant. By participating, they have each in their own unique way played a key role in making Miss Zambia UK one of the best pageants in the world,” Mutale stated.

The BEFFTA Awards ceremony will be filmed for television broadcasting for both UK and international audience. The ceremony will be hosted by UK’s top comedian and Choice FM radio presenter, and TV personality Richard Blackwood.