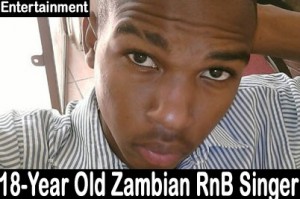 Zambia’s latest addition to the music scene, 18 year old RnB singer Paul Munanjala (pictured above) – popularly known as Da’Prince – is releasing his first album in December, hopefully on his birthday, when he turns 19. He said his album will be called ‘No One’ and that it will feature 12 tracks. Some of the songs on the album are the title track ‘No One’ as well as ‘Zambian Girls’ and ‘She’s My Lady’ which are already being played on most Zambian Radio Stations – and making airwaves! Paul explained that ‘No One’ is all about assuring a woman that she’s the only girl in a guy’s life and asks if she considers the guy as the only one in hers!

On his album he features Slap Dee, B-Flow, Miller, Tsoya and his Producer Daxon who is also his vocal coach. Paul’s with the K-Amy label to whom he was introduced by Kalumba Chikonde, popularly known as K-Smash – a Muvi TV presenter. Paul said he’s also been inspired to sing RnB by singers such as Usher and Chris Brown and on the local scene, Exile. He also said he’d love to do a collaboration with international singer Usher Raymond one day.

Paul is not only an RnB singer but also works as a presenter on Muvi TV one of Zambia’s TV stations. He presents Zed News and The Michael Jackson Dance Show. He said his family supports his career 100%. He’s also currently studying Hardware And Network Engineering at New Horizons College. He first explored his music career on Muvi TV’s popular Show ‘Teen Star’ in 2007 and came out second place in the competition.

Zambia’s own superstar Jordan Katembula (JK) is in Chicago, USA, with the other members of the Pan-African super group ONE8 apparently set to revolutionise music in Africa. The One8 project is a coming together of some of Africa’s best musical talent. JK is one of the artistes chosen for the super group along with Nigeria’s talented 2Face Idibia, Ugandan hip hop artist Navio, Amani of Kenya, Tanzanian heartthrob Alikiba, Ghanaian trio 4×4, Gabonese duo Movaizhaleine and DRC’s hot sensation Fally Ipupa.

Rockstar4000 and Sony Music Worldwide have announced the last signing to the ONE8 music super group international mega-star R. Kelly, and the release of the group’s first single – ending weeks of anticipation across the globe. The ONE8 artists have been amped up, living the high life in Chicago and most importantly recording what will no doubt be one of the world’s hottest singles this holiday season.

‘Hands Across the World’ will soon be released to radio stations and clubs across Africa and worldwide. ONE8 will release not only the hottest single of the year, but also a full album and DVD later. This long-term project was kicked into high gear when the artists flew into Chicago late last month to record ‘Hands Across the World’ with R. Kelly and his world class production team. The group also recorded a video and documentary to be released shortly.