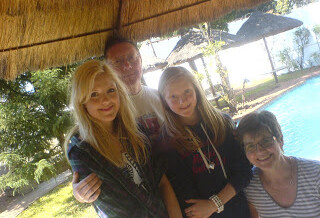 I first met Richard Downey in 1979. He’s pictured above with his wife Anne, and daughters Jenny and Katherine, enjoying the poolside at Chanters Lodge last weekend. I was General Manager of Ridgeway Hotel in 1979, (now Southern Sun Ridgeway) and one of the first things that happened after I’d taken up my new appointment was that our Chief Accountant, John Fletcher resigned to take up a similar post at the Pamodzi Hotel, now Taj Pamodzi, across the road! As this was roughly a month before the famous, and for us huge, Commonwealth Conference held in Lusaka that year (which incidentally decided the independence of then Southern Rhodesia) it was a crisis. Luckily we were able to recruit Richard, then working for Deloitte, Haskins and Sells on the Copperbelt. Richard held the appointment for about 3 years before returning to UK to further his career.

So, having not seen Richard for about 10 years since his last visit to Zambia, I was delighted to receive an accommodation request for a three night booking at Chanters Lodge for him and his family for last weekend. At the time we confirmed the reservation we also confirmed that he, and at least one other member of his family, would guest on the Chanters Lodge Experience with the DJMJ Ingredient ft Soulchild, our regular sponsored Sunday night radio show which airs at 20.00 hrs every Sunday on Zambezi Radio 107.5 fm – ‘Let The Waves Flow’. Richard duly appeared last Sunday with daughter Jenny and it was a super occasion.

“Why did you first arrive in Zambia?” DJMJ wanted to know, and Richard explained that he’d first come to take up an appointment with Deloitte Touche on the Copperbelt in 1975. He’d been planning to return to UK in 1979 when the call came about a possible appointment at the Ridgeway, and thus he’d taken up his first accountant’s job in industry as opposed to the ‘profession’. In the end he’d been happy to stay in Zambia because he’d met his wife Anne through his job at the Ridgeway. Anne’s also a CA and had been working for Deloittes in Lusaka when they met.

Richard explained to listeners that when he’d first gone back to UK, he’d taken up an appointment with Anchor Hotels, after which he moved on to work for the Harvesters chain, helping to hugely multiply their number of pub and grill outlets. Currently he was working for Balls Bros. “Did he have regrets about leaving Africa?” we asked, and he replied that although he missed Africa he felt he’d made the right career decision. He added that he’d love to return one day and ‘put something back into Zambia’. We hope he does.

Daughter Jenny was in good form. “How old are you?” “13”. “Where do you go to school?” “Surbiton High School” “Have you got a boyfriend?” “No!” Followed by giggles! “What have you done since you arrived in Livingstone?” We asked her, and she explained that she’d been all the way down to the Boiling Pot when they’d visited Victoria Falls and ended up having to be carried across a stream. They’d also been on a brilliant game drive in the Mosi-o-Tunya National Park that afternoon with Bwaato Adventures, and had seen loads of different animals including elephant, buffalo and impala. What else had the family planned for their short stay in Livingstone? A half day canoeing/dinner cruise combo for the following day which Jenny was looking forward to, and thereafter they were off to Luangwa Valley and to the Lower Zambezi.

The music on the show was right up to date and super as usual. To give Richard and Jenny a flavor of the latest Zambian music we played two tracks from Haamoba – ‘Tizakondana’ meaning ‘we’ll take care of each other for ever and ever’ and ‘Mooye’ which is Chitonga apparently meaning ‘woman’ or ‘he’s found a girl’. As usual there was debate about the precise meaning of the songs… ‘Room Service’ by Pitbull for all the hoteliers, and ‘Beat Again’ the track from JLS that had taken the UK charts by storm the previous week and is the current UK number one, both featured. Now that surprised young Jenny! Old and current favorite tracks of mine were both on the playlist. ‘You Saw The Whole Of The Moon’ by Waterboys from the 80’s and ‘She Is A Bad Mamma Jamma’ by Carl Carlton a great fresh number. “What’s a Mamma Jamma?” I wanted to know. “A hot black girl” replied Milimo quick as a flash! I’ll take his word for it and the Urban Dictionary link there shows he was right!

We had an extra prize on offer this week – a brilliant Barak Obama T shirt sent from the States by Shel And Claire Weissman, previous guests on the show and we simply asked listeners to text us the name of the President of the US – you can imagine the response! We gave away the standard dinner for two as well, for the first person to text us the country that Richard and Jenny live in. That prize was quickly won as well. It was great to catch up with old times “Were you at the Ridgeway when Richard used to sing?” DJMJ asked Richard Downey “No” was the reply – “I didn’t know that he could!” “We’ve never heard him either” was Milimo’s helpful answer!