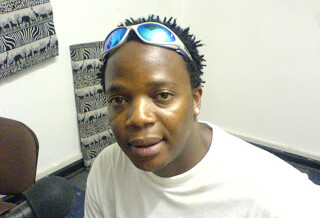 “What’s your real name?” I asked our most recent guest (pictured above) on The Chanters Lodge Experience with The Milli Jam Ingredient featuring George Soulchild, our regular Sunday night radio programme airing from 20.30-21.30 hrs on Zambezi Radio 107.7 fm, Livingstone’s most popular local radio station. “Just call me Skoolboy” he replied. “I really need to know your name” I persisted. “Very well” he said “it’s Gift Zhinga but please don’t mention it on air” – and we didn’t! But we weren’t finished with the matter – “How did you get the name ‘Skoolboy'” Milli Jam asked immediately we started the show. Skoolboy (we won’t use Gift Zhinga here either) explained to listeners that he came from a very poor background. He’d been at secondary school at Linda Secondary School in Livingstone and he’d been forced to drive a taxi at night to raise the money for his schooling, his Clients had christened him ‘Skoolboy’ – though it was his granny who’d first given him the name. And it stuck!

Skoolboy was good value on the show. He contacted St Michael and Dandy Krazy, two local music stars for live phone interviews during the programme and we spoke to both of them about an upcoming European tour for Zambian musicians which Skoolboy is trying to arrange. He splits his time between The University of The Hague where he’s studying for a degree in international law and the USA, where he is trying to promote the activities of Dutch Water Dreams, a company with whom he’s involved. He’s certainly been very active since his days of taxi driving at night and trying to stay awake for Grade 12 lessons during the day! Milimo asked him if he’d met Naomi Campbell when he was watching the Charles Taylor trial at the International Court in The Hague, but oh! He had not! “She was well protected” he said.

The music on the show was great. We opened with ‘Up’ – the latest from Justin Bieber featuring Chris Brown. The track went back to back with ‘Never Forget You’, an interesting co-operation between Lupe Fiasco and John Legend. George featured Hamooba with ‘Song Of The Year’ and K’Millian’s ‘Nizakukonda’ on our local music spot, while Milimo played the Dixie Chicks ‘Wide Open Spaces’ back to back with ‘Take Me Away’ by Keisha Cole.

We told the public how to find Lodgeblog and gave them some information about the stories that had featured on the blog the previous week, and as usual we gave listeners to the show news of the charts – UK and USA Pop and USA Country – concentrating on the top 3 in each case. After this spot we played Luke Bryan’s ‘Someone Else Is Calling You Baby’ – the current number one on the US Top 100 Billboard Country! Right up to date on the ‘The Experience’!

Skoolboy revealed that he’s still single (“careful” I cautioned “we have a lot of female listeners and you’ll be getting them worked up!”) He looks forward to being married and having children. He dreams of becoming a fully fledged international lawyer and running his own big enterprise. Seeing what’s he’s achieved so far, we wouldn’t bet against it!