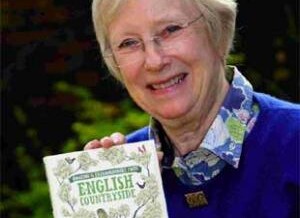 My sister Ruth Binney’ new book Amazing and Extraordinary Facts – The English Countryside is newly published and gets a great review in the Dorset Echo. Here’s what the paper says:

“There is a certain fly that lays its eggs in cowpats. Nothing unusual about that, you might think – see a field of cows and you will find a plague of flies – but this particular insect manages to lay its eggs in the dung while it is actually en route from the cow to the ground.

It is split-second timing that’s hard to beat and just one of the many wonders of Britain’s natural world. A collection of fascinating facts about our landscape and the creatures and plants that inhabit it have been compiled in Amazing and Extraordinary Facts: The English Countryside, which is the ninth book published by best-selling Dorset author Ruth Binney.

From ‘snake stones’ and chalk figures to the ecology of cowpats and the malign reputation of the hedgehog and much more besides, the book is a delightful tome to dip in to at bedtime and an informative companion on country walks. “It has been such fun to put together and I am really thrilled with the book,” said Ruth, who lives in the shadow of the village church in West Stafford, near Dorchester.

“The only trouble was that every time I thought of an example of something, it was in Dorset but I wanted to be more even-handed so I deliberately looked further afield. “I started writing down the facts that I knew were amazing and extraordinary, but my main aim was to turn the book into a detective story so as well as finding things out, people could use it to help them interpret the landscape.”

Ruth grew up with a deep love of and fascination for the countryside, which stemmed from the walks her mother would take her on as a child when the family lived near Tiverton in Devon. She went on to study Natural Sciences at Cambridge and moved to London where she worked as an editor for Readers’ Digest. She is now happily settled in Dorset, a county she loves.

“It is so beautiful and I love it because it is so varied,” she said. “You have the coast and the fields, landscapes and wood – it’s all here.” Amazing and Extraordinary Facts is a treasure trove of informative and quirky titbits.
“I think the book is a really lovely mix of history and archaeology, folk lore and natural history and they are all things that appeal to me,” said Ruth.

Some parts of it are popular on a grand scale while other nuggets of information may be common knowledge to a few people who, like Ruth, have a deep understanding of rural life and landscape. “Learning where names come from is always popular,” she said. “There is a village near Dorchester called Troytown and the word ‘troy’ means a turf maze. I don’t know where it comes from – maybe it is religious and people walked round mazes as an aid to meditation. Today, of course, we have maize mazes, which are great fun.

“A lot of people are also interested in lost villages. We have Tyneham here in Dorset, of course, but there is also a place near Sheffield where a river was dammed to make a reservoir and a village was flooded. In the summer when the water levels drop, you can see the remains of the village. “There are also lots of stories of well-dressing, such as we do in Upwey.”

The effects of people’s presence on the landscape are inescapable. There are the barrows that undulate along the horizon, the standing stones and henges, such as Stonehenge and Avebury, ancient hedges that criss-cross the landscape and the flint tools regularly unearthed while gardening and ploughing. Their origins all make fascinating reading.

We continue to mark the land, not just with new roads and developments, but also through conservation practises such as the building of beetle banks on arable land, which offer a safe haven for insects and attract the creatures that feed upon them. Aspects of the natural world make up a large part of Ruth’s book, which is packed with wildlife lore concerning all sorts of creatures.

“The woolly pig is a popular one,” said Ruth. “It was apparently a fierce pig and may have had its origins in a pig that had a curly coat. “Pigs have always been a large part of human culture. In the old days everybody had a pig and in Celtic times they were worshipped, which is the complete antithesis of the unclean animal of legend. “There are also the big cats, of course. I haven’t seen one but I know people whose word I trust who have seen them.”

Big cats make an appearance in Ruth’s book, where she writes ‘since 2005 there have been more than 500 eyewitness accounts, some backed up with convincing photographs of animals dubbed by Natural England as ‘exotic, non-native and unidentified’, of which 38 were big cats.’ However, she does add a warning coda: ‘Everything is not always as it seems. One animal seen in Norfolk and alleged to be a big cat actually turned out on closer investigation to be a big badger’.

Badgers themselves, ancient, secretive and lumbering, are given space under the heading ‘nature’s gravediggers’. Folklore has it that they bury their own dead and that their ‘funeral parties’ make ‘wailing noises akin to human weeping’. Unfortunately, most of us only get to see badgers that have been killed on our roads, their fatal fascination with Tarmac due to the fact that they instinctively follow ancient tracks that are now criss-crossed with carriageways.

“The book has been really good fun to work on,” said Ruth. “There was so much stuff I had to choose from I could have just gone on and on. “I think that even if you do know a lot about the countryside, the book will add to your enjoyment and you will get more out of your walks. “I hope people will see the book as a way of helping them interpret the countryside and draw their attention to things that they might not otherwise notice. Hopefully it will show them how important it is to preserve it.”

• Amazing and Extraordinary Facts: The English Countryside is published by David and Charles and costs £9.99.