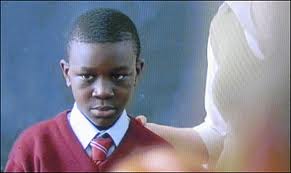 Here’s some good news this Monday morning, from UK Zambians

A Zambian young actor, Olutunji Ebun-cole, has emerged as winner of the BEFFTA Young Achiever Award in the BEFFTA Special Awards Category. Olutunji (famously called Tunji) beat seven other contenders aged between 13 and 28, to win the prestigious Award. Tunji, whose mother is Zambian and his father Nigerian, is at 13 years of age an accomplished young actor. He has played main leading roles in film and television. He played the Lead role of ‘Joseph’ in the Short Film “New Boy” which was nominated for an Oscar Award at the 2009 ceremony. Tunji also acted as ‘Cola Kid’ in James Bond’s ‘Casino Royale’, directed by Martin Campbell. His other credits include working with David Swimmer (famously known as Ross in the American Sitcom “FRIENDS”) in the film called “Run Fat Boy Run”. He also played as background artist in the film ‘Sixty Six’ with Paul Weiland and as ‘Child in Street’ with David Corneberg in “Untitled”.

Tunji who has an amazing CV of his acting career at such a young age, has also starred in many short films on television in addition to appearing as a child actor, an extra, voice over, background artist, walk-on and has featured in many high profile adverts by Nickelodeon as well as on BBC, BBC2, Sky, ITV, JWT, CBBC, BBDO and AMV including adverts for Scaletrix, Clarks, Sainsbury’s, Persil and ‘CHINS’, among many others.

On receiving the news of Tunji’s Award, his Zambian mother Jayne Mwondela said ‘I am very proud of Tunji. He is such an amazing child. He loves what he does, and he does not let it get to his head. I thank God for giving me a child such as Tunji.”

The BEFFTA Awards honour and recognize black and ethnic talent in Entertainment, Film, Fashion, Television and Arts. While other nominees have to be selected through a public vote to win an Award in their respective categories, winners in the BEFFTA Special Awards Category such as Tunji are selected by a Special Panel of BEFFTA Members.

Tunji was honoured together with other BEFFTA winners at a lavish red carpet BEFFTA Awards Ceremony to held on Saturday 30 October 2010 at the Westminster Central Hall in London.