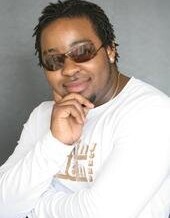 We felt privileged to host Zambian singing sensation Ty2 (real name Mbangweta Mwendaweli) as our guest on the latest edition of The Chanters Lodge Experience with The Milli Jam Ingredient featuring George da Soulchild – that’s our regular radio show airing on Zambezi 107.7 fm every Sunday night at 20.30 hrs and streaming live on the internet. That’s Ty2 in the picture above. “How did you get the name Ty2”? Milli Jam wanted to know at the top of the show. Ty2 explained that when he was at school he had (wrongly!) been considered short in stature – as was the then president of Zambia Frederick Titus Chiluba. His school mates had christened him Titus 2 and he had shortened this to Ty2 for the stage and the name had stuck! His break through into singing had come initially from singing in church. People likened his voice to Shaggy and Buster Rhymes and he liked both these artists.
Ty2 told listeners he’d been in the music business for ten years and had released three albums with a fourth – ‘Forever’ recorded and close to release. He also had his own company Big Buoy Ltd handling micro finance, buying and selling vehicles as well as operating a boutique in Lusaka. He and his wife are also planning to open a phone shop soon. Married with two children, Ty2 explained that he was in Livingstone for two shows, one at Elite Apartments and one at Vision Pub and Restaurant. He said both shows had been packed and his performance had gone down very well. He said the most popular of his tracks at his shows was ‘Smile’.
The music on the show was excellent as usual. We opened with the current UK number one ‘Read All About It’ by Professor Green featuring Emile Sande, back to back with Bruno Mars and ‘Runaway Baby’ – real rock and roll that one. Of course we featured two of Ty2’s tracks – ‘VIP’ very recently recorded and ‘Spotlight’ featuring Kaufela (aka George Soulchild). Super track ‘Spotlight’ and Milli Jam confirmed that the track was hot in the Livingstone clubs. Milli Jam himself featured ‘She Doesn’t Mind’ by Sean Paul (he does love that one!). Our oldie of the week was the Bee Gees with ‘Night Fever’. Listeners found it tough to tell us who was singing the track – we’ll make it easier next week! We also featured ‘When I Was A Youngster’ by Rizzle Kicks and Amy Winehouse ft Nas with ‘Like Smoke’ from her upcoming posthumous album.

Ty2 told listeners that his ambition remained to become known internationally for his music. He would one day love to win an MTV Award. On an international note we were delighted to get messages during the show from both London and Paris from people listening to the programme live on the internet.