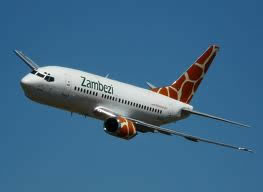 Zambezi Airlines, the Zambian outfit, is looking to expand, according to this piece from LusakaTimes

“Zambezi Airlines is negotiating with some countries in the Southern African Development Community (SADC) and beyond for possible opening up of new routes next year. Commercial director Sidney Siabamundi said in an interview in Lusaka that the airline had made applications to fly to other routes and was awaiting approval from respective governments. “We are coming up with exciting programmes for our clients in the coming year. We intend to open up new routes within SADC and beyond, but we can only name the countries once the respective governments approve our applications’’.

The airline currently offers flights to Lubumbashi in Democratic Republic of Congo, Blantyre in Malawi, Harare in Zimbabwe, South Africa’s Johannesburg and Dar-es-Salaam in Tanzania.

Mr Siabamundi said the airline had recorded overwhelming bookings following the promotional same-day-return fare on Lusaka-Johannesburg route running from December 13 to 31. Mr Siabamundi said business executives had taken advantage of the US$99 fare to Johannesburg to conduct business and return the same day. “We have a flight going to Johannesburg leaving at 07:00 hours to arrive at 09:00 hours and return at 18:00 hours in Lusaka the same day,’’ he said. The purpose of the promotion is to encourage the business people and corporate partners to conduct business on the same day without losing out on time for other engagements.

Zambezi Airlines hopes to utilise its flights as a hub for connection and transit for those travelling in the SADC countries. The airline was founded in 2008 and has grown to be one of Africa’s leading low-cost airlines. Zambezi has a business model that allows it to offer cheap fares without compromising on service.