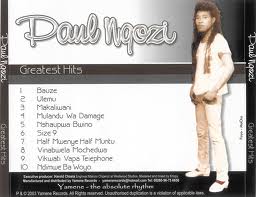 I loved this piece from Henning Goranson Sandberg for Think Africa Press, part of the Guardian Africa Network

“Over the past few years, Zambia’s music scene has grown in prominence, especially thanks to the successes of political songs such as Bufi or Dandy Krazy’s election-changing Donchi Kubeba. But music as a social force has a long history in Zambia, in particular the gilded age of Zamrock, which flourished during the social unrest of the 1970s. Like West Africa, Zambia too went through a psychedelic period marked by social upheavals, flares, fluorescent colours, flamboyant hairstyles, generational differences, and powerful music. Today, Zamrock has sadly been largely forgotten. But with some of the Zamrock’s finest gems being re-released this year, there is hope it will be remembered and its place in history solidified.

The story of Zamrock starts, as so many other things in the modern history of Zambia, with exploitation of ore from the Copperbelt region. Under colonialism, as Zambia’s kingdoms merged into one centrally ruled polity, political, economic, and social change rocked the country. Mass migration into Zambia’s rich mining districts, meant musicians had a sudden exposure to different musical styles. Traditional instruments – from drums (such as the high-pitched “talking” vimbuzza) to stringed instruments (like the babatone) to the kalimba (hand piano) – joined with instruments such as the accordion and guitar, which were brought into the country by the British ruling classes.

In 1964, when western rock, psychedelic music and the Congolese rumba (soukous) were popular, Zambia gained independence. Soon after, the radio station, the Zambia Broadcasting Service (ZBS), was formed. In these early days of independence, ZBS led a drive to focus on domestic musical talent and made a concerted effort to collect Zambia’s ceremonial, festival, and work songs nationwide. President Kenneth Kaunda, an amateur musician himself, passed a law that at least 95% of music on the radio had to be of Zambian origin. His intention was to help create a uniquely Zambian musical presence. Ironically, however, this policy turned out to be instrumental in creating one of the most interesting west-meets-southern-Africa fusion styles of the time.
The musical style that became known as Zamrock came to embody the economic despair that followed the 1973-1974 oil crisis, which flung Zambia into recession and exacerbated a wide range of social tensions. The themes of many Zamrock classics bear this out. For example, Working on the Wrong Thing by Rikki Ililonga & Musi-O-Tunya is about being a migrant worker far away from one’s home village, while I’ve Been Losing by Chrissy Zebby Tembo & Ngozi Family is about everyday injustices.

In terms of the context in which it arose, the musical sounds, and the way Zamrock musicians styled themselves, it is easy to characterise the genre as aggressive. Paul Dobson Nyirongo, one of the founding members of Musi-O-Tunya – believed by many to be the first ever Zamrock group – and a member of the band Ngozi Family, for example, went by the stage name Paul Ngozi, meaning “danger”. Meanwhile, one of the most loved bands of the era was called The W.I.T.C.H., an acronym for ‘We Intend To Cause Havoc’.

However the style must also be remembered for its pure and simple entertainment value – the way in which it was dangerously dance-inducing, with elements of funk reminiscent of James Brown and psychedelic guitar solos à la Jimi Hendrix. Good examples of this are Like a Chicken by The W.I.T.C.H., an effortlessly cool song with tight rhythm guitar, and Size Nine by Paul Ngozi and the Ngozi Family, which mesmerises with a catchy wah-wah guitar and jerking rhythms, with the smooth voice of Paul Ngozi wails at a mother-in-law to stop interfering in her daughter’s affairs.

Paul Ngozi is credited with creating kalindula, Zamrock’s distinct musical style, which typically features a lead funky/fuzzy electric guitar and a rock/rumba beat mixing English and local languages. Ngozi was also known for his spectacular stage antics, which included playing the guitar with his teeth, and was adored by Zambian music lovers. With poignant, relevant lyrics he won many awards and represented Zambian music in both Europe and the United States, and even went on a controversial tour of South Africa at the height of the apartheid era.

Many Zamrock bands were disbanded following the economic crisis which was caused by the fall in the price of copper in the late-1970s, when inflation and unemployment rose. The decline of Zamrock was also facilitated by new radio stations, television, and video flooding the country with outside musical influences, such as reggae, ragga, rhythm & blues, hip-hop, and gospel.

Musical piracy hit Zamrock artists hard, and with no safeguards in place, bootleggers in neighbouring countries were able to make money by copying and selling the music of Zambian artists. Many musicians of the era thus left the profession to find other work to sustain themselves and their families. Jagari, for example, became a teacher, and then a miner.

But this didn’t mean that Zamrock died completely. The genre has stayed on the peripheries, with intermittent attempts to try and bring it back to the attention of music lovers.

This latest attempt is by Now Again Records, which has been reissuing some of Zamrock’s finest gems. It started with the brilliant album Africa, the only recording by Amanaz, and was followed by the 1975 album Lazy Bones! by The W.I.T.C.H. and Dark Sunrise, an anthology of songs by Rikki Ililonga and Musi-O-Tunya. The latest release is an anthology of all The W.I.T.C.H.’s recordings from 1972-1977 on four CDs, and more Zamrock albums are due to follow towards the end of 2013.

Zamrock deserves to be a part of the musical history of Africa in a much bigger way than it has been up to now. Through the reissues, more people will hopefully discover the brilliance of the likes of 5 Revolutions, with tracks such as You Don’t Know Me, and Chrissy “Zebby” Tembo, with brilliant songs such as Lonely Nights, in which the fuzzy guitar takes turns with the singing weeping about the loss of a loved one. For decades, beloved Zamrock has been largely forgotten, but the recordings have survived and Zamrock is returning. Let me be the first to say: Welcome back!”