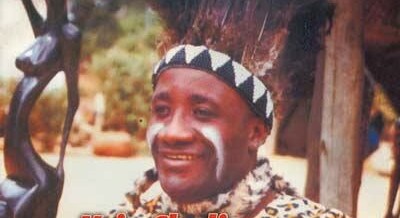 This piece from George Kaufela Soulchild – co-presenter of our weekly radio show:

A few years ago the BBC reported that the Zambian music industry was the fastest growing industry in Southern Africa. The so called ‘Urban Zambian’ artists are enjoying regional and to some extent world wide fame and its all thanks to the pioneers. In the famous words of the great Bob Marley “In this great future, you can’t forget your past”. A band that has been around in Zambia for 20 years plus and still going strong is the evergreen Amayenge Band.

Amayenge is a popular Zambian music group. Started by Kris Chali (above) in 1978 in Choma, the band was originally called Crossbones, one of many Zambian acts that had sprung up to play gigs based on rock. Later the band became known as the New Crossbones, after a change in direction, sponsorship and management. The musical style of the group is called Kalindula, distinctive Zambian popular style with traditional African roots. Kris Chali played a very leading role in transforming this band with humble beginnings to be the most successful band in the Zambian Music history. He died on 30th May 2003.

Amayenge has dominated Zambia’s music scene for almost two and half decades by embracing all the 73 tribes of Zambia and making the entire nation feel a part of their unique vibe,They are without a doubt, the most versatile and successful band in the history of Zambian music,The band has continued to perform in Zambia and other southern African countries including Europe and Asia.

Amayenge has received worldwide attention from WOMAD in London to Asia and the Americas. Amayenge is now managed by Frazer Chilembo.nn

Editors note: I love their ‘Chipolopolo’ track in honour of the Zambian national soccer team!