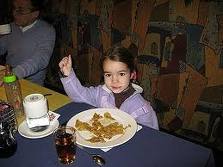 Just then, his father comes down for breakfast and kicks the cat halfway across the kitchen. Little Johnny looks up at his mother and with a sly smile says:

“Are you going to tell him, or shall I?”