Our weekly radio show – The Chanters Lodge Experience with the Milli Jam Ingredient featuring Jay Hillz – was back on the air last Sunday after a two week break due to national mourning, following the death of Zambia’s President Michael Sata. During national mourning in Zambia only solemn music may be played on radio stations, and the music on The Experience is far from solemn! We feature latest international and Zambian hits interspersed by chat with our Guest Of The Week. On this show we were delighted to welcome Zambian celebrity Laura Miti (above), well known writer, human rights activist and political commentator. We don’t usually ‘do’ politics on the programme but Laura weighed in hard given the current state of flux in this country prior to the upcoming presidential by-election on January 20th 2015.

Laura told listeners that she is employed as a public service accountability monitor by the Research Institute of Rhodes University in Grahamstown, South Africa. By coincidence, she said, she is responsible for reporting on the Zambian situation and therefore travels frequently between the two countries. “Legally but not practically” married she has one son completing Grade 12 this year and three sons of her (ex) husband who call her ‘mum’. The Research Institute monitors and trains public service accountability in all of the SADCC countries. Civic actors, MP’s and journalists are amongst those with whom Laura interacts. In Zambia Rhodes University works in conjunction with Caritas, Zambia. “And is there public service accountability in Zambia”? We wondered. Laura smiled…..

The music on the show was good and featured tracks from Gareth Malone and his All Star Band, One Direction, Passenger and The Veronicas. Others were from Jay Rox ft Cleo, Femi Alade and Coztem ft Camster. We give a prize of a dinner for two with drinks at the lodge on the show to the first person to text us the name of the artist on our oldie of the week. On this show Jay and Milli Jam chose a Zambian track by Frankiss ft Manas, but no-one won the prize! “Better luck next week!” We said.

Laura told listeners that she loves tennis and football. In her younger days she was a keen follower of Power Dynamos in Zambia and even used to travel to away matches. These days she supports Arsenal. Milli Jam and I were happy about that! Her favourite tennis player is Raphael Nadal. At one time she wrote columns for the Post and Sunday Times newspapers but right now is not published – except on Twitter, which she confessed to love! She completed Grade 12 at Roma Girls and obtained a degree in education at the University of Zambia. She would be in Livingstone for the following week and although she had no plans to bungee jump she told us that one time she had done the gorge swing. Milli Jam also had no plans to bungee jump – as usual!! Music wise Laura loves John Legend. 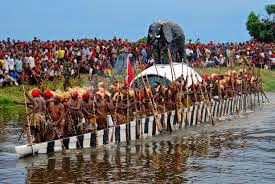 A new book “Inspired by the Zambezi” by David Lisle Whitehead has just been self-published.
It can be purchased for ZKW 150 from The River Club or from Zig Zag in Livingstone. The book costs US$20 from Elephant’s Walk in Victoria Falls.

“David has written the most delightful memoir about his life in Barotseland, and his lifelong fascination with the Lozi people and the Bulozi kingdom. Titled Inspired by the Zambezi, and sub-titled Memories of Barotseland and a Royal River – the mighty Liambai, it is one of those gems that anyone travelling to the region simply has to beg, borrow, buy or steal – preferably buy, as all proceeds from its sale are going towards building a school near Makusi Village on the Zambezi in Sesheke District.

It was a remarkable upbringing, all the more so given that David went on to Oxford University as a Rhodes Scholar, studying under Nobel laureate, Prof Hans Krebs – even I knew who Krebs was, having learnt about the “Krebs cycle” in high school biology.

As he says in his memoir about growing up in Bulozi, “relating my experiences in Bulozi will, I hope, serve to illustrate how lucky I was to grow up in such a magical, friendly world dominated by the fantastic Zambezi River. We lived amongst an amazing tribe, the Malozi, from whom I learned many lessons while imbibing their colourful language as if it it were my own. I even used to dream in Silozi; and sometimes I still do.”

The book is populated with colourful characters, some of whom went on to become household names in Southern Africa – the Meikles brothers, after whom the famous Meikles Hotel in Harare is named, the Susman brothers, founders of the modern day Woolworths, and the various members of the royal families of both Bulozi and Lesotho (Constantine Seeiso, later to be King Moshoeshoe II, was his Oxford tennis partner).”

Quite a lot of the music we played on the latest edition of the Chanters Lodge Experience with the Milli Jam Ingredient featuring George da Soulchild Kaufela was related to the late great Nelson Mandela by way of a tribute. ‘The Experience’ is our one hour regular Sunday night radio show live on Zambezi 107.7 fm, Livingstone’s leading local radio station. We opened with Johnny Clegg with Savuka’s briliant ‘Asimbonanga’, our pick of the week was U2’s latest ‘Ordinary Love’ from the soundtrack of ‘Mandela – Long Walk To Freedom’, the new movie about the great man’s life, and we closed with Tracy Chapman’s 80’s smash ‘Freedom Now’ begging the authorities to release Madiba. It was the least we could do.

Our Guest on this show was the inspirational Brenda Mufalali (above) newscaster and presenter on Zambezi 107.7 fm and the only lady so employed at the station! Brenda told listeners that she enjoyed working with all the men and that at least ‘they had a mother’! George and Milli Jam grinned. Brenda has a long history in news and broadcasting in Zambia having worked for Radio Chengelo, Radio Mosi-o-Tunya, Guardian Weekly and Times of Zambia during various moments in the past. She told listeners she had been with Zambezi 107.7 fm for the past three years. Apart from news casting and news gathering Brenda has her own very successful, government sponsored weekly women’s programme on air ‘Women In Success’ which explores and highlights challenges faced by women in Zambia. From time to time she also hosts the breakfast show and does other spots on air too.

Apart from the tracks mentioned above, George treated us to the brand new Ozzy track ‘Komboni Dugude’ great track though no-one seemed to know the meaning, it is the lead single from his new album. Soulchild coupled this track with B1’s ‘Sikiliti Ku Bed’. Milli Jam was in the mood for Jay Z and Katy Perry. Our oldie of the week was ‘You’ve Lost That Loving Feeling’ the classic from the Righteous Brothers but no-one was able to text us the right name of the performing artist so the prize we give each week was not won.

Brenda told listeners that she was single ‘but dating’ and as yet had no children. It seems that this is the first time she has revealed her social/marital status on air as after the show, the question and answer had clearly produced a buzz around the studios! She revealed her hobbies as ballroom dancing, reading and travelling. She loves the Zambian national soccer team (check the shirt in the picture above) and also seemed to vaguely support Manchester United which did not go down well with the other assembled presenters. She holds qualifications from the Ideal College of Commerce as well as a certificate in journalism. She is a ‘staunch catholic’. Her taste in music is 90’s, slow tracks and gospel. Yes, she does sometimes go clubbing….shock, horror in the audience! The biggest challenge in her job? Confirming stories, and editors, in that order!

Asked where she would like to be and what she would like to be doing ten years’ from now Brenda said she would still like to be involved with the media but perhaps not in her present job which should be for younger people by then. She has a serious and great ambition to start and run an orphanage, she herself was an orphan and she wanted to do something for people in a similar predicament. We were sure that with her driven, dynamic, commanding personality she would achieve that!

These days in Zambia it’s quite hard, in my opinion, to get a neutral and objective take on the news. ZNBC, Daily Mail and Times of Zambia are all in a state of transition with new management and the Post is still PF – one suspects it will remain so for the foreseeable future. Time then to turn to Zambia Weekly which appears intelligent, independent and thorough without being too verbose or bunged up with adverts – for now. Their take on themselves is below:

“Zambia Weekly is a free ezine that provides an effortless way of keeping up-to-date with current affairs in Zambia. Every Friday, Zambia Weekly sends out an aggregate of Zambian news – the news you really need to know about!

Zambia Weekly compiles, summarises, compares and analyses the news. It is to the point: short and concise! Zambia Weekly promotes factual and objective journalism. It has no political, religious or ethnical affiliations. Zambia Weekly focuses on the coverage of politics, business and development.

Zambia Weekly reaches thousands of business leaders, decision-makers and opinion formers – both in Zambia and abroad.

Wishing them all the best, it is an excellent production.