“How long ago was the first time you were the Guest on our programme?” I asked our Guest, Tiko Siliwea, (above) at the top of the latest edition of our weekly radio show, The Chanters Lodge Experience with the Milli Jam Ingredient featuring Jay Hillz, airing at 20.30 hrs every Sunday night on Zambezi 94.1 fm, Livingstone’s leading local radio station. “About six years’ ago” replied our Guest. These days Tiko is one very busy lady! Apart from being the mother of 5 children ranging in ages from 15 to 3 years old and the wife to her pastor husband Ken Siliwea, she herself is a pastor at the Lion of Judah Church in Livingstone. As if this was not enough, her third album of gospel music is about to be released on CD following on from the success of her first two CD’s. The new album is called ‘Sinilesewa’ (It’s My Time) and we played the hauntingly beautiful lead single ‘Kumisanga’ (‘to find you’) on the show. Tiko told listeners that she had written almost all the tracks on the album herself, and that the CD was due for release during the week ahead.

Tiko said that since her last appearance on our show she had obtained a degree in theology from North Western Theological School in USA and had become a pastor at Lion of Judah Church. The church operates from the premises of a former timber company Zambezi Saw Mills, located near the Railway Museum in Livingstone. Congregations vary in size from 250/300 people every Sunday and Tiko is mostly involved with the music and singing at church but also preaches from time to time – of course she has duties in counseling and other responsibilities of the ‘pastor’s wife’ too! She does also have a business specializing in wedding planning and gives singing lessons as well! Busy lady, as I said!

The music on the show was standard. We opened with our new theme TINA from Fuse ODG. We featured smash hits from Mark Ronson ft Bruno Mars, and Philip George. We played Kiesza’s No Enemies back to back with Tiko’s track and also featured titles from Alicia Keys and Kachanana ft Joey B. Our oldie of the week was ‘One Way Or Another’ the 1D version and not the original Blondie record. The prize we give of a dinner for two with drinks at the lodge to the first person to text us the name of the artist on the track was quickly snapped up. My pick of the week was Ellie Goulding’s ‘Love Me Like You Do’ the first track released from the soundtrack of the much anticipated movie ’50 Shades Of Grey’.

Tiko told us that she had been brought up on the Copperbelt mostly by her dad, and had attended Fatima Girls Secondary School. She had originally come to Livingstone for a job with a now defunct company, before meeting Ken, then a manager with Indeco Estates and the rest is history, as they say! They had been married for 16 years. Jay gasped at that information! Gospel is her favourite music (naturally) and her favourite artist CC Wynans. Tiko loves swimming and tennis and her most loved tennis star is Serena Williams. She was proud of having sung at the Ngoma Awards ceremony in the past, and in 2013 for the closing ceremony of the United Nations World Tourism Organization general meeting held in Livingstone.

International travel is not just expanding, it’s booming. No matter what area on earth you look – OK, maybe not Antarctica — tourism between countries is on the rise. And it’s climbing so much it looks to be at record levels.

But the real incredible news is not that more people are traveling to foreign countries than ever before, but this trend is expected to continue for decades. That’s right, decades. According to the UNWTO World Tourism Barometer, global tourism will increase at an annual percentage rate of at least 3.8 percent through 2030. Wow! For the complete year, UNWTO forecasts 2013 to end at a four percent increase or slightly above, exceeding the organization’s initial estimate for the year.

This year alone tourism is surging to incredible new levels as that new rising middle class we speak about frequently here at Hotel Interactive is actively exploring the world around them and visiting new countries. In all, International tourist arrivals (that’s a fancy way for saying people visiting other countries) increased by 5 percent during the first half of 2013 compared to the same period of 2012. In all, nearly 500 million folks traveled to a country other than their own during the first half of this year, according to the UNWTO.

In fact, this group of 25 million new international travelers is being powered by countries with emerging economies, which saw a year over year increase of six percent compared to those with advanced economies. Those rose a steady and predictable four percent signaling plenty of opportunities for hoteliers looking to find customers in areas that had previously been fodder for potential hotel guests.

“The fact that international tourism grew above expectations confirms that travelling is now part of consumer patterns for an increasing number of people in both emerging and advanced economies” said UNWTO Secretary-General, Taleb Rifai. “This underlines the need to rightly place tourism as one of the key pillars of socio-economic development, being a leading contributor to economic growth, exports and jobs.”

He’s right. Just look at how the numbers play out for regions with established international travel patterns compared to emerging ones. Europe was up 5 percent, but was propelled by Central and Eastern Europe, which saw a 10 percent jump while Southern and Mediterranean Europe rose 6 percent. Asia and the Pacific climbed six percent overall but was driven by South-East Asia which was up 12 percent while South Asia climbed seven percent. Mature markets such as the Americas ( 2%), South America and the Caribbean were at the end of the list. Which makes perfect sense since these markets already have robust travel.

No mention of Africa mind you……. 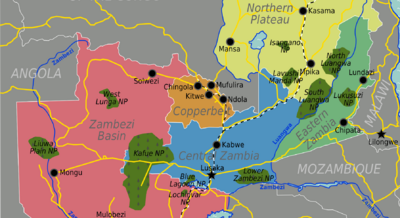 Meet from left to right (above) Matongo Limwanya, Hannah Lubinda and Mavis Mulyata. As you may know Zambia and Zimbabwe co-host the United Nations World Tourism Organization general assembly in the two countries in August 2013. Victoria Falls and Livingstone are the venues. Matongo and Hannah are on the organizing committee of the Miss Hope UNWTO 2013 pageant, in which ten girls will compete for the title in a final to be held in August 2013 at Sun International in Livingstone. Mavis, second placed in Miss Lusaka 2010, is one of the contenders for the title. The prize for the winner will apparently be a car and there is K10,000 (rebased) on offer as well. All three ladies were Guests on the most recent edition of the Chanters Lodge Experience with the Milli Jam Ingredient featuring George da Soulchild Kaufela. This was the last edition of the show in 2012.

Hannah, chair and main mover of the committee explained that the Miss Hope Foundation together with their partners DILab Africa would present a unique pageant concept that is positioned to complement the forthcoming general assembly. She said that the show has the financial backing of the Ministry of Tourism in Zambia, as well as several other commercial sponsors. Several Livingstone lodges and guest houses were also assisting. Contestants would be drawn from all parts of Southern Province in Zambia. Some of this country’s important musicians including Judy, Shyman, Sakala Brothers and Amayenge would be involved.

The music on our show was great, we opened with latest tracks from Ke$ha and Frank Ocean. Zambian tracks were from Bryan featuring PJ and the ever popular SlapDee. Milli Jam dropped numbers from Rihanna and Chris Brown (linked together even on our show!). Our oldie of the week was the obscure ‘There’s A Guy Down The Chip Shop Thinks He’s Elvis’ by the late Kirsty McColl and predictably no-one won the prize on offer for texting us the name of the performing artist. Our pick of the week was Killers – Miss Atomic Bomb and we closed with Redfoo’s ‘Bring Out The Bottle’.

The ladies told listeners that the committee were looking for girls with both beauty and brains for the pageant, and that contestants would receive education about HIV/Aids and cervical cancer as part of their participation. The judges would be looking for girls with confidence. “Who are the judges?” Milli Jam wanted to know, and Matongo explained that their names would be a closely guarded secret to avoid the corruption that had occurred in the past over such issues. We laughed though perhaps we should not have done! The contestants would gather together in a ‘boot camp’ prior to the final. Designers would be involved in dressing the finalists.

We wished the ladies the best of luck in their excellent initiative and took the chance to wish all our listeners the best for 2013.