The Birth Of A Giraffe 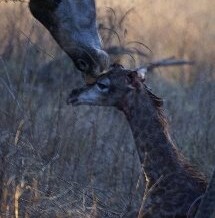 Clients of ours at Chanters Lodge Martin and Moira Jensen were lucky enough to witness the birth of a baby giraffe in the Mosi-o-Tunya National Park when they undertook a game drive with Bwaato Adventures recently. Check this lovely picture of mother and child.

“What temperatures do you experience?” We asked Derek Lee pictured above with partner Lorretta Willams. “About 40 degrees below!” Replied Derek. “Play some music!” I said quickly to DJMJ. “My favourite track at the moment is ‘Walking On Snow’ by Jordin Sparks” chipped in George Soulchild, “can we play that?” “Wait until next week, we’re playing Leona and Alexandra this week!” I replied. “And anyway have you ever walked on snow? He hadn’t! You’ll have guessed that all this conversation took place on the latest edition of The Chanters Lodge Experience with the DJMJ Ingredient ft Soulchild, our regular Sunday night radio show airing at 20.00 hrs on Zambezi Radio 107.5 fm, Livingstone’s best loved local radio station.

“And why does Derek experience temperatures of 40 degrees below?” I hear you ask. Well first of all he hails from Falkland Islands (which is a pretty cold and bleak place in its own right) but although he now lives with Lorretta in Ilfracombe, Devon he works as a steward on board the British Antarctic Survey Vessel the James Clark Ross and frequently experiences temperatures that low during his ‘four months on’ which he works. “What’s life like when he’s away for that long?” DJMJ asked and Lorretta replied that they missed each other a lot but were able to keep in touch on MSN. And, they made up for the parting when Derek had his ‘four months off’! “How long have you been going out together?” We asked, and this entertaining and lively couple told us they’d been together for about 14 months, and though it wasn’t quite love at first sight, they’d fallen in love with each other after 10 minutes when they’d met on Barnstaple Station in North Devon, UK.

(I was getting incredibly ‘homesick’ throughout this show as Lorretta and Derek talked about the North Devon coast which I love, and on which, as a family in the 60’s, we used to have wonderful days out with my parents and siblings in places like Saunton, Braunton, Lynton and Lynmouth. And who could forget stopping for home-made ice cream in Dulverton on the way home to Tiverton having crossed the stunning landscape of Exmoor which my late mum and dad loved so much. Anyway, I digress.)

“Uno, Dos, Tres, Quatro – You Know I Want You” thumped out Pitbull, just one of the tracks we played showing that we’re right up to date on the Chanters Lodge Experience! Alexandra Burke’s “Overcome” was next. “Who’s she?” DJMJ and Soulchild wanted to know, and I explained that she’d been singing on X-Factor when I was in UK last November, and that she’d eventually won the tournament. We played two Zambian tracks so Derek and Lorretta could get a taste of our music, Sikifuna Chabe (‘it’s not my wanting that things are like that, what can I do?’) And ‘Could I Be’ a great track which my 7 year old son Henry loves, both taken from Danny’s latest album ’10 Years’ a smash hit here in Zambia. ‘Could I be the one to be?’ ‘Obsessed’ by Mariah Carey and ‘A Little Too Not Over You’ by David Archuleta contributed to a balanced and popular play list.

“How was your one day safari to Chobe National Park in Botswana?” DJMJ asked Derek and Lorretta, and they told listeners that they’d been incredibly lucky. Just after they’d started their trip they’d come across a leopard sitting in a tree admiring its kill, an impala, which was hanging in the tree next to the big cat. “What other activities have you got lined up for your visit?” We wanted to know, and Derek and Lorretta told listeners that they had a 15 minute helicopter ride organized for the following day and on Tuesday, they’d visit Livingstone Island. They explained to listeners that they’d made their bookings for their visit to see Victoria Falls through Wildside Safaris and had chosen accommodation at Chanters Lodge partly because of the good reviews about the lodge on TripAdvisor. Were they pleased with their choice? Of course!

“What job do you do?” DJMJ asked Lorretta and she explained that she was a medical secretary with the NHS in UK, working in administration in a health care centre dealing with children with special needs, especially autistic children. “Stressful?” I asked. “Can be!” Was the predictable reply. “The children?” I continued. “No the NHS!” Replied Lorretta. LOL! As they say on Facebook. Lorretta told listeners she has two sons in their early twenties both with a mind to go into the media for a career. Derek told listeners about his family life back on the Falklands when he was younger and about farms with 36,000 sheep. “That’s a lot of lamb!” We said. “Did you fight in the war?” He didn’t but told us that the Falkland Islanders were jolly happy that the Brits had won, and that Maggie Thatcher could be Queen of the Falklands any time she liked!

What music were they into? 50’s, 60’s and 70’s they replied, Lorretta especially Dr Hook and Smokey. And sport? Nope. DJMJ as usual asked us about Twitter, the Blog and Facebook and asked me my favourite track right now. It was Lemar – “You Got Me”. “You know” sighed DJMJ to our guests “Richard used to be into 50’s, 60’s and 70’s music now we can’t even keep up with him!” Lols all round!

The Lions of Livingstone

We received this update recently from Safpar who operate the Lion Encounter here in Livingstone. Lots of Guests with accommodation provided by Chanters Lodge who come to Livingstone mainly to see the mighty Victoria Falls have also enjoyed this experience during their visit, and there’s a picture of 3 ladies from Perth, Western Australia, doing exactly that! Here’s the piece:

Walking Sets
Temi and Tswana – Temi and Tswana’s confidence is building all the time. The two have regularly been seen stalking the odd impala or – as their last stalking attempt shows no fear – a giraffe!! These two are far too small to get anywhere near, but its all good practice. Temi and Tswana approach 8 months on the 6th of July, little do they know that their feeding will change from every 2 days to every 3. Temi and Tswana’s age now means that no person will be allowed in the enclosure with the cubs.

Kela, Kwandi and Loma
The largest of our walking lions, Kela and Kwandi – now 13 months, and Loma – now 1 year old, continue to provide us with much entertainment on their walks. During May all three showed great hunting potential by jumping on the back of a Zebra – who promptly showed them where to go with a swift kick! As the river is now getting lower the cubs can go back to doing what they love – hanging out in the water!! Kela and Kwandi love water (a rare but not unheard of trait in lions), and, as the river rose over the rainy season the water has been too high and strong for a quick dip, so they are now looking forward to cooling off in the Zambezi! Obviously, our team of scouts and lion handlers are on careful watch for those crocs!!

Rundi and Rusha
Rundi and Rusha approach 10 months at the start of June, and are enjoying the Mosi Ou Tunya National Park. Rusha, a very independent lion still enjoys her own company, whilst Rundi is quite happy to lay back and receive a belly scratch from us mere humans!

Leya, Zulu and Toka
Our only 2 males, Toka, who celebrated his 1st birthday mid May, and Zulu just 10 months provide a different dynamic to this group. Toka, a firm favourite is as dopey and loveable as ever, enjoying human company, but is quick to end a cuddle if the chance of chasing those pesky impala’s arises! Zulu and Leya are much quieter, with shy personalities – Leya however is growing more confident every day and is starting to realise the benefit of the human touch – ear scratches!! Zulu’s innocent face and dark brown eyes captures hearts daily, and is often seen enjoying his favourite pastime – sucking the other cub’s ears!!
Great stuff – if you like that sort of thing!
0