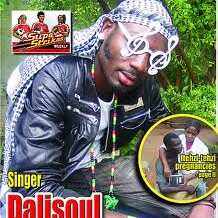 Not long ago, he said albums were not beneficial and only singles will be heard from him. Today, ‘Mwana wa Mukomboni,’ Dalisoul has changed his mind. In an interview with Times Entertainment Dalisoul said after making that decision fans cried out loud, whenever he was performing, for him to rescind that decision not to compile an album again and give them something that they can listen to in their own time, in this case a collection of his music.

The Musunge Mushe (A.T.M) star said he had no choice but to listen to his fans from the shanties because they are the ones that have made him to be where he is today and it was his duty to honour their wishes. “I made that decision not to release my second album based on my dissatisfaction with the earnings that I got from my first one Shansha and now that my fans want another one and are ready to support me, I will give them another chance” he said.

Dalisoul said that this time around, Supershine, the marketers and distributers of CDs and DVDs, had done their homework and he is happy with the new deal. Supershine has started manufacturing glass covers in order to curb the high levels of piracy, and Dalisoul is happy with the development.

Mukomboni is the new album from Dalisoul and it is out on the streets and contains unheard tracks like Vomela and Mwiko which features Rich Bizz. Vomela encourages people living with HIV to accept their status and that by doing so they will enhance the chances of living longer with the virus.

Other tracks on the album are the old Nalila (condom), Chipyango and Shansha, which appears as a bonus track. It’s a nine-track album and features JK, Petersen, Karasa, Shyman and Bob Muli.