Efficiency Is Free by Seth Godin 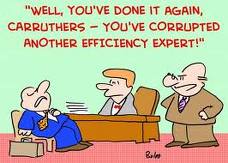 As you know, I love Seth Godin’s blog – short, sweet and to the point. Here’s the piece on efficiency:

“Philip Crosby wrote a seminal book (Quality is Free) in which he argued that it’s cheaper to build things right the first time than it is to fix them later. Obvious now, but heresy in Detroit 1980. Quality quickly became not just a better way to manufacture, it became a marketing benefit as well. Not only was quality cheaper to make, it was cheaper to sell.

I’m struck that we need a new book, call it Efficiency is Free.

So why doesn’t everyone do this? For the same reason the quality revolution took a full generation to take hold – it costs more right now. It takes planning right now. It requires change right now.

Right now will always be difficult. But efficiency is still free.