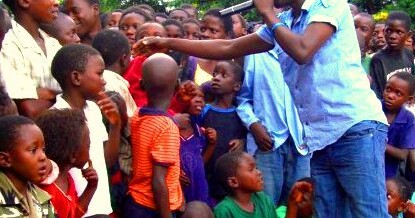 You might have thought you’d seen the last of Kaufela in Ty2’s ‘Spotlight’ but just like a remix, he’s back! Kaufela, for the uninitiated is George Mukwita, otherwise known as Soulchild – talented co-presenter of our Sunday night radio show ‘The Chanters Lodge Experience’ on Zambezi 107.7 fm, is pictured above at a show in Chief Mukuni’s Village, just outside Livingstone.

George is back on on his latest song “Good Times” featuring Roberto on the hook. “Good Times” is the latest song from his forth coming long awaited debut album titled “Kaufela Music” and it’s his third collaboration with Roberto on the forthcoming CD. The song talks about taking time off work and other things that keep one busy, simply to spend some quality time with your significant other, it’s all about taking a holiday and breaking off everything to enjoy each others company. George’s significant other? At this stage there’s no news on that front!

Kaufela spins tales of life and love in a variety of Zambian languages including Lozi, Bemba and Nyanja as well as English. His unique voice resonates with vibes that will keep you hooked on; his delivery on every song is simply artistic. Some of the songs on which he shines include TY2’s ‘Spotlight’ and Brotherhood’s Team ‘If its Lovin’. His debut single ‘Smile’ featuring Roberto hit the airwaves two years ago announcing his arrival. Kaufela has also worked with Leo Muntu of Black Muntu fame, Ozzy, K’Millian, B-Flow, Masi, Scarlet, Petersen, Shyman, Cofi (South Africa, Durban) and Hamoba.
Kaufela also triples as a music producer and radio presenter in Zambia’s tourist capital city Livingstone. He began his professional career in 2003 and first received recognition when he was featured on a Leo Muntu track titled ‘Ntawi’. A couple of features from TY2 and Crystal Shaun then followed in 2006-2007, before he began to pursue his desire to write and record his own album.

We hope to see it finally released very soon!