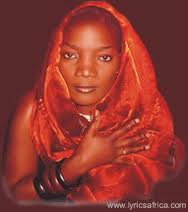 Looking for something to blog this morning, I turned to a piece that George Souldchild wrote about the Chanters Lodge Experience, our weekly Sunday night radio show that goes out on Zambezi Radio on 107.7 fm at 20.30 hrs, while I was away on leave:

“How are you? How’s the England weather treating you? Livingstone is hot! Too hot! Despite that I’m OK and so is Millie Jam. We really missed you again last Sunday, the response was very good. The playlist was a mixture as always. We played ‘Your Love’ by Nickie Minaj, ‘Coca Cola’ by Oga Kent (very hot Zambian song at the moment). Also JK featuring Salma – ‘Kapiripiri’, Ne-Yo ‘Crazy Love’ and Chris Brown – ‘Deuces’ – just to mention a few.” Sounds a really good show!

After this George went on to write:

Soulful songstress Maureen Lupo Lilanda is re-branding her stage name. Affectionately referred to as Aunt Maureen locally, the singer now wants to be identified as Lupo. At 43, Maureen’s music career is not strange to Zambia, and the singer is confident her latest stage identity will not take anything away from her music.

The Ngoma award winner, whose latest album is being produced by Zamsounds of Denmark, said that her album will be entitled ‘Simply Lupo’. “I’m dropping Maureen and Lilanda, I’m just using Lupo on stage. I think musically Lupo sounds easier to pronounce and easier to remember and also I am pro-Zambian, so really I would like to drop the name Maureen because that’s borrowed culture.” She said she’d slowly been introducing the name Lupo to prepare her fans for the change.

“If you noticed I changed from Maureen Lilanda to Maureen Lupo Lilanda, so people will not notice much difference when it’s just Lupo. It will now be the re-establishment of Maureen as Lupo,” Lilanda explained. She described her musical journey as an evolution, tracing it from the time she was a young African trying to imitate Western musicians, to now a mature artiste who appreciates her own tradition and culture.

“In terms of the first album, I was doing everything myself, dancing and all, and now I’m really appreciating my roots and I have people taking care of the recording. I think I’m more experienced, more mature and more saleable, more convincing and more pro-Zambian,” she said.

Lilanda said she decided to record in Denmark as a way of attaching great importance to the quality of the product and promised that Simply Lupo was expected to hit the shelves by February 2011.”

This piece interested me. Maureen made her stage debut at the Ridgeway Hotel’s Folk Night when I was General Manager of that hotel – a mighty popular show it was every Tuesday evening too – a great place for unknown artists to come along and show their talent. Maureen’s father was PermSec in the Ministry of Tourism and a friend of mine. We wish Maureen all the best with her new image and new album! We’ll certainly feature it – and her – on our radio show when we get the chance!