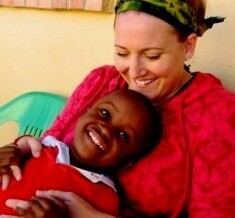 “How come you two are sisters?” MJ (Milli Jam) asked Megan Bloemker when she and her sister Catherine appeared as guests on the latest edition of The Chanters Lodge Experience with the MJ Ingredient ft Soulchild last Sunday, the weekly radio show sponsored by Chanters Lodge on Zambezi Radio 107.5 fm, Livingstone’s popular local radio station. When you see Megan and Catherine in the cute photo above, you can understand why MJ was intrigued by the relationship! Megan explained to listeners that Catherine, a little Lozi orphan girl was adopted by Megan’s parents Betty and Bob in Zambia and taken home to Dixon, Illinois USA in 2004. She’s now turned 7 and has come back to Zambia for a visit with friends and relatives, and to see the mighty Victoria Falls. The family and friends Lyla, Cindy and Lianne Tjoelker were staying in accommodation reserved at Chanters Lodge (of course).

Megan works for Action Zambia as a missionary in Lusaka, although she holds a degree in opera studies from Roosevelt University in Chicago and studied further at the prestigious American Academy of Dramatic Arts in New York. She’s been in Lusaka for 3 years training teachers and organizing feeding programmes at Streams of Living Waters School in Mtendere and Emmanuel Christian School in Kanyama both high density housing areas in Lusaka. “Why missionary work and not acting or singing?” We asked and Megan explained that she’d first visited Africa when she was 16, involved in building a church in Zimbabwe. Africa had called her back – as it does – people say it ‘gets in your blood’! Megan’s also involved in an adoption programme in Lusaka.

“We hear you went to Chobe National Park on a 1 day safari today” MJ said to little Catherine “did you have a nice time and what animals did you see?” Catherine answered shyly that she’d seen Lulu The Giraffe, lions and elephants. “Why Lulu?” we asked and Megan explained that Catherine had a book by Carol Harvey called Lulu the Friendly Giraffe. “What’s you favourite animal in the whole world?” We asked Catherine. “A baby elephant” she answered. “And who’s your best friend back in America?” “Amanda” Catherine answered.

The play list was hot this week. “You Are Not Alone” by the other MJ was a natural choice and so too was “Better On The Other Side” The Game’s new song featuring Chris Brown, P.Diddy, Polow Da Don, Mario Winans, Usher & Boyz II Men – a tribute to the late Michael Jackson. Drake’s sizzling right now and we featured “A Night Off” something the assembled company were all looking forward to soon! Ne-Yo’s “Round and Round” and Ciara’s “Never Never” are two of my favourite tracks and we also featured two K’Millian numbers (he’d been our guest on last week’s show) “Give You My Love” and “Mukati Kamutima”. Lady Gaga and Asa topped off the list.

“Have prize winners been taking up their prizes?” MJ asked, and I replied that for some reason they had not in the past two weeks, perhaps because I’d stopped texting them that they’d won. So we asked listeners what public holiday Zambia was celebrating this weekend and the messages started streaming on to my phone. Winnie won a dinner for two and I sent her an sms right away telling her so!