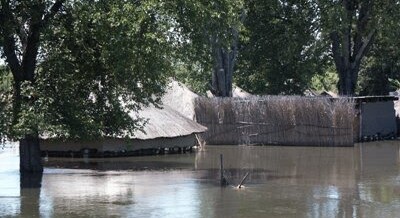 The level of the Zambezi River passed the four-metre mark over the weekend and reached 4,14 metres at Katima Mulilo yesterday – eight centimetres up from Saturday. The normal level for this time of the year is around 2,30 metres, and exactly a year ago, the Zambezi level measured 3,75 metres, according to Namibia’s Chief Hydrologist Guido van Langenhove in the Agriculture Ministry.

“The monitoring and early warning systems are better in place this year,” according to Van Langenhove. “The US space agency Nasa and MeteoSat satellite images have been indicating good but not very high rains over the past days. Adequate and timely information regarding upstream river levels is being received from Zambia. As part of the UNOOSA sensor web initiative, the Ukraine Space Research Institute will also provide radar images of the flooding situation upstream,” he added.

The Okavango River at Rundu had dropped to 6,03 metres by yesterday afternoon, 8 centimetres down from Saturday. The average level for February is 5,44 m, and a year ago the Okavango was 6,19 m high at Rundu due to heavy rains in southern Angola.

In the previous two rainy seasons both the Zambezi and the Okavango River burst their banks and caused devastating floods in Namibia and Zambia, affecting thousands of people and causing severe damage to houses, fields, bridges and roads.

Courtesy of the Namibian