From Calgary to Livingstone! 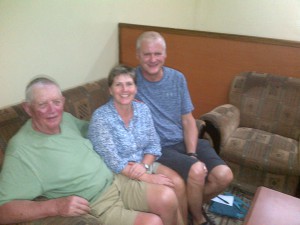 Meet Bev Loney (left above), as well as Heather and Doug Spackman, guests on the most recent edition of the Chanters Lodge Experience with the Milli Jam Ingredient featuring Jay Hillz. Bev is Heather’s dad, and Doug her husband of the last twenty eight years! Staying at Chanters Lodge, booked through their agent Mike Donovan at Lion Dog Safaris, Bev, Heather and Doug who hail from Calgary, Alberta, Canada, were kind enough to give us some of their time to appear as guests on our local radio show, airing every Tuesday evening for an hour on Zambezi 94.1 fm, Livingstone’s leading local radio station.

Heather is a school counsellor, Doug an IT specialist in the oil industry and Bev many years retired. Doug and Heather have two ‘kids’ one boy one girl, but no grand children as yet!

Doug told listeners that they had been planning a trip to Africa for the past eight years. Apart from Bev and Heather who had been to North Africa it was the first time for the family to travel to Africa.. Having been told they were at the beginning of a one month trip, “why start in Livingstone?” Wondered Milli Jam. Heather explained that although they had the great Niagara Falls in Canada they had always wanted to see Victoria Falls and now that they had done so, they were certainly not disappointed. They believed Victoria Falls were more impressive.

The family told listeners that apart from seeing Victoria Falls, they had very much enjoyed a one day safari to Chobe NP in Botswana, as well as the lion encounter and elephant safari locally while they had been in Livingstone, and had found Zambians to be very warm and friendly people.

The music on the show was good with tracks from Years and Years, Zayn Malik, Lukas Graham, Charlie Puth ft Selena Gomez as well as Elle King. Also, FJay, Sussie, Mr Veezy and Justin Bieber (in honour of our Canadian guests)! 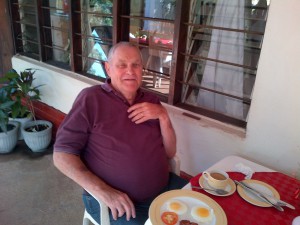 Meet Gordon Brown (above) frequent guest at Chanters Lodge, Livingstone and also our guest on the most recent edition of the Chanters Lodge Experience with the Milli Jam Ingredient featuring Jay Hillz, The Experience is the weekly radio show sponsored by Chanters Lodge airing every Sunday night at 20.30 hrs for an hour live on Zambezi 94.1 fm, and is an easy mixture of latest international and Zambian pop music, interspersed with chat with our guest. Gordon told listeners that this was his fourth or fifth visit to Livingstone in recent years, and that he found Chanters to be a good place to stay, not a luxury lodge, but homely, comfortable, clean with good food and helpful, friendly staff. That made us feel happy!

Gordon is Canadian from Victoria, BC and spent 35 years as a primary school teacher, headmaster and administrator in the Canadian education system. He had been ‘retired’ for the past twenty years. He is a widower with a son, daughter and four grandchildren all living quite near him in Victoria. Our guest told listeners that he first came to Zambia in 1996 under VSO (Voluntary Service Overseas), a quasi British government outfit, as a lecturer at David Livingstone Teacher Training College in Livingstone. He had also spent time in Ghana under the auspices of VSO.

The music on the show was good with tracks from Fuse ODG, Nero, Hayden James, Chris Brown, Beatenberg, Kayo, Majik Links ft K’Millian and Fifth Harmony. Gordon’s own taste in music he described as ‘very 50’s’! Sports wise he follows ice hockey and his grandson’s support of Wolves in UK has given Gordon a little interest in EPL soccer in UK.

Gordon is very much involved in The Canadian Harambee Education Society (CHES) which helps girls get secondary education by raising funds for scholarships for Kenyan and Tanzanian girls who gain Secondary School placements, but have no funds for school fees. Also by placing CHES girls in boarding schools (wherever possible) to maximize their success. They also support special projects when donations are so targeted such as building dormitories, enriched learning centres and services to support them. CHES sends volunteers (often retired teachers) as agents in Kenya. Gordon is currently busy on a project to provide admin facilities for CHES in Kenya.

Gordon had spent the day of the show in Chobe NP and had been delighted to see both lion and leopard, as well as the usual array of elephant and other animals on the trip. During his visit he would be going across to Zimbabwe to see the Falls from that side, plus a visit to Nakatindi Community School to review progress, as he had been involved in the establishment of that school.

Meet Ben Tshin (above) from Toronto, Canada and Guest on the most recent edition of the Chanters Lodge Experience with the Milli Jam Ingredient featuring Jay Hillz, our weekly radio show airing at 20.30 hrs for an hour every Sunday night on Zambezi 94.1 fm, Livingstone’s leading local radio station.

Ben told listeners that he hailed from Toronto, Canada though his roots are in Indonesia. He works for World Vision Canada, he told listeners that World Vision Canada is the nation’s leading agency dedicated to improving the lives and futures of the world’s most vulnerable children. They have over 50 years of experience and are dedicated to providing real and lasting change to over 100 million people in World Vision supported communities. Ben was in Zambia to check on some of their projects in Southern Province and had decided to take a weekend off to visit Livingstone. In the course of his job he had visited many African countries including South Sudan and Uganda. World vision are also involved with health and food security issues.

The music on the show was great. We opened with Carly Rae Jepsen’s latest hit back to back with a new single from Alesso. Milli Jam and Jay dropped numbers from K’Milliann and Ozzy representing Zambia, as well as international stars Clean Bandit and Natalie la Rose. Our pick of the week was a new track from Ciara and we closed with Cheyenne from Jason Derulo. Ben said his musical tastes were largely Canadian but his favourite all time band is U2 – he was excited to have tickets for one of their Canadian concerts later in the year.

Ben told us that he had studied System Design at University in Waterloo, Canada. He has been married for two years, his wife Julia is a doctor. He is a fan of ice hockey and supports Manchester United. We reminded him of their last three results – all losses! While in Livingstone Ben was staying at Chanters Lodge and had been impressed with the mighty Victoria Falls. The afternoon of the show Ben had done a half day’s white water rafting which he described as ‘extraordinarily exciting’! He said had enjoyed the food at Chanters Lodge which made us happy!