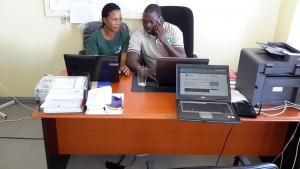 We were delighted to welcome an old friend of Chanters Lodge, Chris Mweetwa (above with wife Prudence), as our guest on the most recent edition of the Chanters Lodge Experience with the Milli Jam Ingredient featuring Jay Hillz, our weekly radio show airing every Sunday at 20.30 hrs for an hour live on Zambezi fm, Livingstone’s leading local radio station. It was Chris’s second appearance on the programme, his first having been in 2011 when he was the proprietor/driver of just one Toyota Corolla taxi. My how things have changed! Chris’s company handles all of Chanters Lodge safari requirements to Chobe as well as staff transport.

Chris told listeners that he had established his company – Chris Taxis and Tours – in 2011. The company now had one twenty eight seater bus and five eight seater mini buses as well as a taxi. Chris Taxis has five full time employees including 4 drivers and a consultant. In 2012 they were able to establish the company’s website and two years’ ago started to receive their first reviews on TripAdvisor. These things had enormously helped the company to take off and increase sales. The company is able to offer transfers and safaris throughout this part of Southern Africa but their main focus is still on excursions to and safaris in Botswana. To emphasise the point Chris told listeners that he had recently returned from carrying out a guest transfer from Johannesburg.

The music on the show was good with latest hits from Lunchmoney Lewis, Galantis, D’Banj, MC Wabwino, Kantu and Tough Love. Others were from Years and Years, as well as David Guetta ft Nicki Minaj.

Chris told listeners that he had remarried in 2011 following the untimely demise of his first wife and that altogether had five children. He is a staunch member of the SDA church in Maramba and heads their development committee. His favourite music genre is gospel. Milli Jam wanted to know which UK football team Chris supported and was delighted to receive the answer ‘Arsenal’. Some time was spent discussing the about to finish, UK season.