Peter and Frances Shaw on The Experience! 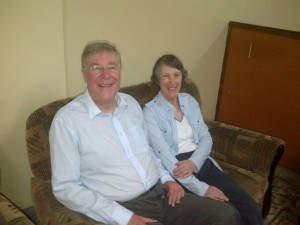 Meet Peter and Frances Shaw, guests on the most recent edition of the Chanters Lodge Experience with the Milli Jam Ingredient featuring Jay Hillz. ‘The Experience’ airs live every Tuesday evening at 20.30 hrs CAT on Zambezi 94.1 fm, Livingstone’s leading local radio station, and is a great mix of latest international pop music together with Zambian tracks, as well as chat with our weekly guest, sometimes overseas visitors staying at Chanters Lodge like Peter and Frances, sometimes Livingstone personalities, occasionally members of the lodge staff!

Peter and Frances hail from Guildford in Surrey, UK, though Peter is a Yorkshireman by birth. Frances was brought up in Stratford-upon-Avon. They told listeners they had been married for 40 years and that they had met in Toronto, Canada. They had both been educated at Durham University and both hold doctorates. The couple told listeners that Peter, a management consultant, had been in Zambia for about ten days on business, Frances had joined him a little later. They were now on holiday. It was their first time to visit Zambia and felt they could not do so without seeing the mighty Victoria Falls. They had done so that very afternoon and were impressed, comparing the area favourably with Niagara Falls which they had also visited. They were looking forward to a camping trip to Chobe NP in Botswana during the following weekend.

The music on the show was good with tracks from Fifth Harmony, Flo Rida ft Jason Derulo, Justin Bieber and Riton (Rinse & Repeat lol!). Other were from Shenky Shuga, Rihanna ft Drake and DJ Zoz. Frances said her pop music favourites were 60’s tracks, Buddy Holly and the Beatles. Peter is a big fan of Brass Bands, often linked to the former colliery towns in his native Yorkshire.

Peter, a Hull City supporter, and an author of some 22 books on leadership is a former Director General in the UK Civil Service, and Frances a leading mover in the Feed the Minds NGO. They have three grown up children. a daughter and two sons. One son is a minister in the Church of England and indulges in Iron Man Triathlons, the other, a management consultant plays Ultimate at international level.