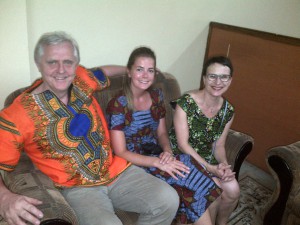 Meet Petter Voll (above left), Elisabeth Krieg (above centre) as well as Randi Fikse (above right), guests on the most recent edition of the Chanters Lodge Experience with the Milli Jam Ingredient featuring Jay Hillz. ‘The Experience’ is our weekly radio show airing every Tuesday evening from 20.30-21.30 hrs live on Zambezi 94.1 fm, Livingstone’s leading local radio station. The show is an exciting mixture of latest international pop and local music tracks interspersed with chat with our guests. We also give news about the UK soccer scene, what’s hot on social media and pop chart updates from UK, USA and Zambia.

Elisabeth told listeners that she hailed from Trondheim in Norway and had been in Livingstone for the past few weeks studying at David Livingstone College Of Education as part of her training to become a teacher. She was studying mathematics and religious education in Zambia but back home in Norway physical education as well. She had much enjoyed her time in Zambia which would come to an end ‘in about a week’. Petter, her dad, and Rondi, her step mum were visiting for a week from Norway and staying at Chanters Lodge.

Petter explained that he was a planning officer in communtiy development in Verdal, a municipality in the middle part of Norway, not far away from Trondheim. Rondi works in administration in the medical industry in Levanger a municipality in Nord-Trøndelag county, it is part of the Innherred region. She told us that she is responsible for some thirty secretaries in the hospital, only one of whom is a man. This made Milli Jam and Jay laugh and they wondered ‘how he got on’. Rondi said they should invite him on to their show to find out! Petter and Rondi had been married for eight years but known each other for sixteen.

The family said they did not have specific musical tastes and were mostly happy to listen to whatever was playing on radio, though Elisabeth told us that she did like some Norwegian acts of whom we never would have heard. We had not! On the show we played tracks from Alessia Cara, Fifth Harmony, Freddy Kalas, Nick Jonas ft Tove Lo, as well as Rihanna, MC Burner, Cassper Nyoveit and Alpha Romeo ft F-Jay, Koby and B-Mack.

Petter told us that it was his first visit to Zambia though he and Rondi had been on safari to Tanzania in the past. During their week in Livingstone they had seen the mighty Victoria Falls, enjoyed a sunset cruise on the Zambezi and dined out on the steam train which they described as ‘expensive but superb’. They had also visited Mukuni Village and had special Zambian clothes made which they were wearing for the show! They had enjoyed Chanters Lodge and found the Zambian people very friendly.

Asked where they would like to be and what they would like to be doing in ten years’ time, Petter said he wanted to be retired and enjoying more of his favourite hobby, trout fishing in the Norwegian rivers. Rondi said she hoped she was still working. Elisabeth told us that she would like to be a good teacher in a good job, travelling and a home owner. Marriage? No comment though there was mention of a Norwegian boyfriend currently studying in Switzerland!