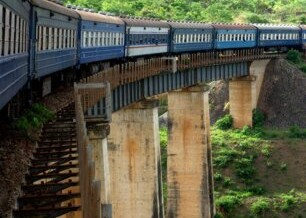 This from Southern Times
China will will assist with rehabilitation of the Tanzania-Zambia Railway (TAZARA). In recent years, Beijing has on several occasions extended financial and technical assistance to TAZARA, which was built with Chinese money in 1976 but has been facing operational challenges and is operating far below capacity.

It is believed upgrading the line will encompass ensuring a ready route from landlocked Africa to the Indian Ocean – with possible links to lines going to the Atlantic Ocean – and that this will also greatly benefit China, which has huge economic interests on the continent. China’s Minister of Commerce, Chen De Ming recently said the assistance was another sign of that country’s commitment to Africa.

In a statement, Chen said the project would eventually link Eastern and Western Africa and help speed up industrialization.
The statement was released after a meeting with Zambia’s First President, Dr Kenneth Kaunda, in Beijing. Dr Kaunda was in China as President Michael Sata’s special envoy. Minister Chen said the port at Dar es Salaam, Tanzania would need to be overhauled to cater for increased cargo.

Experts have already conducted a feasibility study, which will be submitted to China’s President Hu Jintao. Dr Kaunda assured Beijing of Zambia’s goodwill and that despite widespread media claims to the contrary, China’s investments in the country were safe.The 1,870km TAZARA line links Zambia’s Kapiri Mposhi to Mbeya in Tanzania.

The authority running the line is exposed to the tune of US$700 million. Earlier last year, China provided a US$39m interest-free loan to TAZARA.