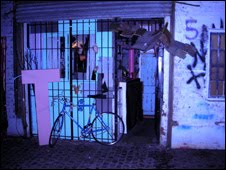 I liked this article on the BBC website as something different in restaurants in London.

A generation has been taught by TV chefs to aim high in their cuisine, but some people are taking it further and opening mini-restaurants in their living rooms. In a dark cobbled back street in east London, there is a battered wooden door that hides a restaurant unlike any other. Stepping inside is like tumbling through a rabbit hole into Wonderland.

Outside there are wailing sirens and grimy neon-lit takeaways, but inside the space bursts with brightly-coloured fabrics and strange theatrical objects – a pig’s head mounted as a hunting trophy, a globe, a dolls’ house, a glowing orange duck. This is The Pale Blue Door, a restaurant that is actually the home of set designer Tony Hornecker, and one of about a dozen “underground restaurants” to have recently opened across London.

Advertised by word of mouth, e-mail and on Facebook, underground restaurants are private homes opened to the public by keen amateur chefs. Tony’s surreal cabaret event serves a chunky tomato, basil and crouton starter, followed by slabs of roast beef, then a crumble dessert, all served in gilt-edged Victorian porcelain, for £30 including wine.

Less flamboyant is The Bruncheon Club, which offers Sunday morning Bloody Marys, poached eggs, coffee, croissants and newspapers, while sitting in a sunny back garden, for £12. What underground restaurants have in common, though, is the chance for amateur chefs to test their skills for a paying public and an emphasis on eating as a social experience.

This movement has been enabled by the internet, but it actually translates the virtual into the real. One of the first to open her home to hungry strangers was Ms Marmite Lover, who does not want to give her real name. As well as hosting regular dinners, she reviews venues and is writing a book about underground dining.

She says the emphasis on eating communally is what makes underground restaurants special.
Unlike a traditional restaurant, she says, you can go to an underground restaurant alone and feel comfortable talking to the people next to you – something that has particular value in an anonymous city like London. “What’s interesting about this movement is that it’s been enabled by the internet – Twitter, blogs – but it actually translates the virtual into the real.”

At The Pale Blue Door, diners are made to feel welcome by a maitre d’ in trainers and running vest, and soon find themselves talking to people on other tables. There’s a group of estate agents, happy to discuss house prices, while another table houses a birthday party in fancy dress.

The Bruncheon Club, also based in east London, is at the Victorian terrace home of 20-something flatmates Gregg and Maya. At a normal cafe, conversation with strangers is not always an option Guests arriving on a sunny Sunday morning are welcomed with a kiss on the cheek, while a young man wrapped in a towel darts across the hall out of the bathroom. Then it’s through the chef’s bedroom, and into a sunlit garden through some French doors.

There is a patio table, set with water glasses, cutlery and Sunday newspapers. The trellis has been decorated with balloons and soft reggae music burbles along in the background. In their kitchen, as Gregg trickles oil into a food mixer full of duck egg yolks and butter, Maya explains what inspired them start their Sunday bruncheon club.

It began with the idea of offering a complete service for people with hangovers – going to their homes, cooking breakfast and tidying up – but then she visited an underground restaurant and was hooked. “I didn’t think it was out of my league – I’ve got a nice house, I can cook good food. It’s a business idea that doesn’t cost that much – there’s no start-up costs.”

Maya says they simply set up a Facebook page, an e-mail address and a blog, and the whole thing seemed to take on a momentum of its own. “We thought we just wanted to do it as an experiment, but it just took off without us putting much effort in and it just spiralled.” The customers seem happy with the idea. “I like the community aspect to it. You’re more likely to meet new people and talk to people, while a restaurant meal is just private,” says Alistair Boyle, 28, who works in digital advertising.

Rachel Wareing, 29, a writer, adds: “It’s exciting to go somewhere that’s secret, to find a new hidden place.” However, the one issue with a community driven by blogs, e-mail networks and Facebook pages, is that it tends to be rather self-selecting. But in time, perhaps, the phenomenon may spread.