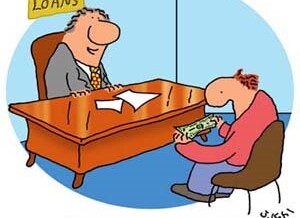 I liked this from CNNMoney.com by Jay Goltz and I’m sure the solution to the problem he sites is right. In Zambia we see many small businesses fail because their owners don’t plough enough profit back in the business, and either fail to maintain their standards as a result, or end up running out of stock, or money or both. Credit and loans are really hard to get in this part of the world. We’ve also seen plenty of small businesses in Zambia fail because the families of the owner feel it’s their right to ‘get a share’ of the business either in cash or kind, and Zambian tradition makes it hard for owners to refuse to help members of their family. Anyway here’s Jay’s piece:

“Last month I wrote about Debbie Dusenberry, owner of Curious Sofa, a home-furnishings boutique in Kansas City, Kans. The store has a reputation for great products and imaginative display, and its revenue had been growing nicely for eight years. But when Dusenberry sent me her financials, she included this plaintive note: “Our January was down 20%, and for the first time I am a little worried. If I had any reserve, I wouldn’t be nearly as concerned. We’re cutting back anywhere we can by freezing spending, and I laid off my first employee in eight years.”

Dusenberry’s financials explained clearly why her business has potential – and why she’s in trouble. The store’s annual revenue has grown to more than $800,000. Her labor costs as a percentage of revenue are a little high, and she probably needs to lay off another employee. The rent isn’t terrible, although I think she can get her landlord, who clearly doesn’t want to lose a tenant in this economy, to cut her a break. But here’s the thing: Her statements show that she’s lost money eight years in a row.

Every year, Dusenberry said, she told herself that she was going to work harder and sell more stuff, but working harder doesn’t fix a broken business model. It just prolongs the agony. This kind of delusional thinking, I believe, explains why some 70% of small businesses go broke before their 10th anniversary, according to the Small Business Administration. Entrepreneurs tend to concentrate on what they love, whether it’s the artist who paints but doesn’t spend any time marketing or the chef who lives in the kitchen and ignores her financials. Every business owner needs to be his or her own CFO. Delegating that task to a book-keeper or an outside accounting firm means putting your life into their hands. They generally don’t know the ins and outs of your business well enough to make critical decisions.

Dusenberry’s accountant told her to cut expenses, which is fine but insufficient. The truth is that she’s on the road to insolvency and her only hope is to come up with a 2009 budget that shows a profit. She has no more credit and must pay down some of her loans. The obvious question, of course, is how she’s going to turn a profit if she can’t cut more expenses. It won’t help to sell more stuff because her cost of goods sold is too high. Believe it or not, Dusenberry needs to raise her prices. Yes, even in this economy. If that sounds ridiculous, you need to do the math. Here’s a simplified example: Let’s say Dusenberry has been buying sofas for $1,000 and selling them for $2,000. If she sells 10, her sales are $20,000 and her cost of goods sold is $10,000, leaving her a gross profit of $10,000.

Now suppose she raises the price to $2,200. That’s a 10% hike, but let’s also assume that the price increase means she sells 20% fewer sofas, or a total of eight. This takes her sales to $17,600, her cost of goods sold to $8,000 and her gross profit to $9,600. While it looks as if she’s falling short, she’s actually going to come out about even in this scenario because she’ll save some variable costs – delivery, credit-card fees and freight – by selling two fewer sofas. But here’s my real argument: Dusenberry runs a niche business with a loyal following. Her customers aren’t going to revolt if she starts charging market prices. I think she’ll sell nine sofas at the new price, making her profitable.

Could I be wrong? Sure. But the laws of price elasticity suggest otherwise. And if Dusenberry keeps doing things the way she’s been doing them, she’ll go out of business anyway. At least the price adjustment gives her a shot.