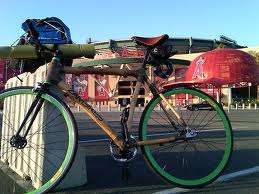 Loved this when I found it on Filtre

“In Zambia, bicycles grow on trees, or rather bamboo, the primary building material for many Zambikes. Groves of it grow outside the company’s factory, which is run by two Zambians and two Americans on a quest to build a local bike for Africans, and employ the “uneducated and underprivileged” to make them for the rest of the world.

So far, Zambike has cranked out at least 8,000 metal bicycles and 900 bicycle ambulances and cargo carts in Southern Africa; they’ve sold 200 bamboo bicycle frames worldwide. The company’s goal, besides benefiting communities around it, is to sell affordable, effective transportation throughout Zambia, a country where the average life expectancy is 47 years old, and infant mortality approaches one in 10 births. The for-profit firm was founded in a partnership with U.S. nonprofit Akerfa, and has employed more than 100 people, says Zambikes co-founder Vaughn Spethmann.

“Our products are saving and changing lives,” said Spethmann during an interview with SOCAP Europe. “We are creating opportunity and employment. “Our goal of having Zambikes be run by Zambian nationals will ensure that Zambikes will be a catalyst for change for decades to come.”

The design is relatively straightforward, though labor intensive. Three-year-old bamboo is cut, preserved, and cured for several months before being cut to size. The frame is then bound with wood glue and plant fiber cords soaked in epoxy, and affixed to the metal components. The whole process takes as long as a week, but produces a 95% bamboo bike that is “one of the classiest, comfortable rides in the bike industry” with almost “magical” vibration absorption, says the company. Models have fetched about $900 abroad, and a messenger bike version is now available for export.