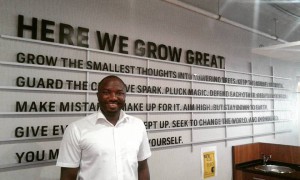 Meet Panji-Nanji Kakube (above), guest on a recent edition of our local radio show – The Chanters Lodge Experience with the Milli Jam Ingredient featuring Jay Hillz. The show has had a regular Sunday night spot on Zambezi 94.1 fm, Livingstone’s leading local radio station, ever since 2007 but has recently run into problems due to ‘load shedding’ – simply known as power cuts in other countries, every Sunday night at the station’s studios in downtown Livingstone. It is hoped the show will soon move to a Tuesday night when the electricity supply may be more reliable.

Panji told listeners that he was a local Livingstone lad, having been born in the town and also completed his secondary education at Linda High School. He was back in town for a short holiday during the festive period. He is currently employed in Lusaka by Joe Public (Z) Ltd, a high powered communications agency out of South Africa. He is manager in the operations department servicing several ‘blue chip’ clients including EcoBank and Mugg and Bean.

Panji has a diploma in computer technology as well as marketing management. The early part of his career saw him employed at Maramba River Lodge in Livingstone and then Capitol Cinema, when there was a drive, led by Peter Jones, to restore the historic art deco building to its former glory.

The music on the show was good featuring, among others, tracks from Fuse ODG, Coldplay, The Weekend, Tove Lo and Maria Carey. Panji told listeners his taste in music was quite wide – he had a love of Jimi Hendrix and locally the work of Zone Fam and Jay Rox.

Panji is single, intends to marry in June this year, and has a little girl Claire, aged 1 year and 8 months. “Awwww”. We said. Asked where he would like to be and what he would like to be doing ten years’ from now. Our guest told listeners that he wanted to be a leader in the advertising industry in Zambia, the thought leader and go to person in fact!