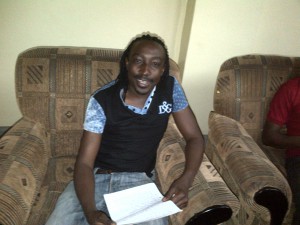 Meet Englebert Saxon Mungala, guest on the most recent edition of the Chanters Lodge Experience with the Milli Jam Ingredient featuring Jay Hillz. ‘The Experience’ is the weekly radio show sponsored by Chanters Lodge airing every Sunday at 20.30 hrs CAT on Zambezi 94.1 fm, Livingstone’s leading local radio station. Why the ‘7/11 Experience’, well Saxon (as he prefers to be called) is currently development manager for the new 7/11 project in Livingstone on the site of the former Ayoba Night Club/ Pub and Grill. Saxon said the new project will comprise a liquor store, a restaurant doubling as a disco at night, as well as a smooth VIP lounge on the first floor with ‘cool’ music. Quite some undertaking we opined.

Milli Jam wondered where Saxon had picked up his very un-Zambian first names. Saxon told listeners that his father had been working in Germany and as a fan of Englebert Humperdink the 60’s singing star, had used the name when naming Saxon! Born and brought up in Lusaka Saxon had completed his secondary education at Namwianga Secondary in Kalomo before heading back to Evelyn Hone College in Lusaka where he had studied for diplomas in graphic reproduction and marketing.

After College Saxon had become a DJ/Music Presenter at Jungle Night Club, Zenon and the Alfa, where he and Milli Jam had first met. Saxon had recently returned from eight years working in Malawi and Mozambique on the club circuits. With every intention of returning to work in Lusaka, his plans had been hi jacked by the 7/11 operators who had grabbed him to develop their Livingstone project.

The music on our show was good with tracks from Rachel Platten, OMI, The Weekend, Chindima, JK, Bobby East, Justin Bieber and Madcon.

Saxon told us that he is as yet unmarried and has a 12 year old daughter Christine who stays with her mum in Lusaka and whom he misses a lot! At home he listens to soft music and his favourite artist is R Kelly. He is not into sport and at the present time is totally focused on getting 7/11 up and open by 18th September. we touted for tickets for the opening and Jay wanted to know a lot about the DJ jobs that might be on offer! No guesses why!