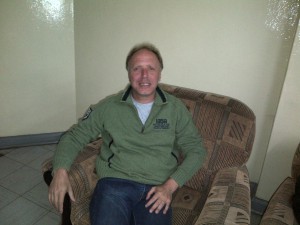 Meet Joost Vranken (above) from Ghent in Belgium, and guest on the most recent edition of the Chanters Lodge Experience with the Milli Jam Ingredient featuring Jay Hillz. The Experience is the weekly radio show we sponsor on Zambezi 94.1 fm, Livingstone’s leading local radio station. The show airs every Sunday evening live from 20.30 – 21.30 hrs.

Joost told listeners that he was in Zambia on holiday and was spending a week or so in Livingstone at Chanters Lodge. He was comfortable at the lodge describing the operation as quiet, homely and friendly. He’s an administrator back in Ghent working for De Lijn, a big Belgian transport company. Joost went on to tell us that he had first come to Zambia in 1991 as a history teacher at Kawambwa Boys Technical Secondary School. In those days national service was still compulsory in Belgium but he was able to come to Zambia to work, as an option to serving in the military.

On completion of his national service he had taught for a number of years at Nkrumah Teachers Training College in Kabwe. He holds a degree in African History and Languages from Ghent University in Belgium. He set up a business in Zambia but left to return to his home country in 2007. Asked about the difference between Zambia and Belgium he said ‘the people, the space and the light’. He clearly misses Zambia!

The music on the show was nice featuring tracks from Lost Frequencies (a Belgian artist), Calvin Harris, Chvrches, Demi Levato, Jay Rox, Big Sean ft Jhene Aiko, T-Sean ft JK and Sean Paul. There were a lot of Seans in there! Music wise Joost is into jazz and stars like Van Morrison.

Joost said he and the friend with whom he had travelled had very much enjoyed the white water rafting on the Zambezi during their stay but not the climb out of the gorge. His friend had bungee jumped while he looked on in shock and horror!

On the sports scene he is into squash and was very much involved in the administration of the sport in Zambia when he was based in Kabwe, even accompanying the national under 21 team to the All Africa Games in Botswana. He supports his local team in Ghent in the Belgian league and in England Arsenal. We were happy about that!