The Chosen One Rocks ‘The Experience’ 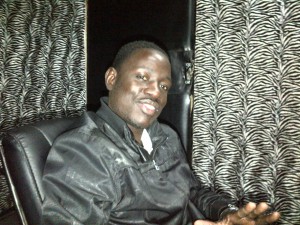 James Silavwe (above) also known as ‘The Chosen One’ is, according to Milli Jam who knows about these things, the best club DJ in Livingstone and amongst the best in Zambia. “What makes you say so?” I wondered. “He has great mixing skills, a good choice in tracks and he really knows how to keep the dance floor heaving and buzzing”! Was the reply. “If he’s based in Livingstone, how come you say he’s amongst the best in the whole country?” James explained that he has become known across the country as he works for Eastpoint, and the company has clubs in Lusaka, Chipata and on the Copperbelt. The DJ’s are from time to time sent on temporary transfers to sister clubs, hence James has become known and popular throughout the land!

This whole conversation took place on the most recent edition of the Chanters Lodge Experience with the Milli Jam Ingredient featuring Jay Hillz when James was our Guest and ‘the chosen one’ on the night! Our show airs every Sunday night on Zambezi fm for an hour live and is popular throughout the local community. “How did you get the name ‘The Chosen One’?” Jay asked our guest who explained that when he first started as a DJ some six years’ ago, his colleagues felt that he needed a handle to his name and his friend Obi had suggested ‘The Chosen One’. The name had stuck. James told listeners that before being employed at Eastpoint he had been trained at Club Fairmount in Livingstone by Milli Jam amongst others. He described Milli as his inspiration.

James told us that he had been brought up in Livingstone but had for a while been educated at Kitwe Boys School before transferring to Hill Crest Technical Secondary School in Livingstone. He is still single although ‘spoken for’, he has no children as yet. He attributes his success in his field to the care he takes in pre-selecting and preparing his tracks for each and every show.

The Chosen One told us that he supports Manchester United – that was enough for Milli Jam to almost avoid asking him anything about football – it would have been different if he had said Arsenal. Changing the subject, had he ever bungee jumped we wondered? He had not – though said he would like to. That’s what they all say….