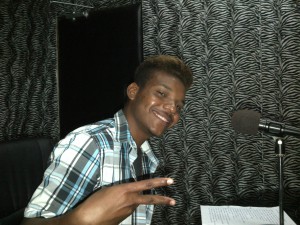 “Hoare is not a very Zambian surname” remarked Milli Jam at the top of the show. Wilf explained that his great grand father was Irish and the name had been passed on through the generations. He assured listeners that he was a Tonga from Livingstone! “Born and brought up in the city”? Asked Jay Hillz. “Yes indeed!” said Wilf. He went on to say that he had been educated at Linda Secondary School in Livingstone but would still need to revisit his Grade 12 Maths exam before he could enroll for further education. Eventually he would love to study journalism and media studies.

He now has several slots on Zambezi FM including a phone in show when listeners phone in describing the problems in their love lives and receive advice from Wilf. “Aren’t you a bit young for that?” I wondered (Wilf is just 19) – apparently not as Wilf’s show is a big hit on the station. The music on the show was good with tracks from Fuse ODG, One Direction, Charlie Puth, Chef 187, DJ Snake ft Aluna George, Jason Derulo, Drimz, Macklemore and Sarah Harding. Wilf told listeners that he had a broad taste in music and listened at home to country, R&B and hip-hop.

On the modelling side Wilf had formed Wil-Wild-3300 which would produce and promote his port folio of photographs enabling him to tie down more modelling contracts. Did he prefer radio presenting or modelling, we wondered. “I love both!” the reply. Wilf told us he is single but has a steady date. “Not really into sport but I like boxing” said Wilf when asked about his football preferences.Rather surprisingly he loves to cook and bake at home.
Asked where he would like to be and what he would like to be doing 10 years from now our young guest said he would like to have finished his studies and to have founded his own successful agency in Livingstone.