Swiss Volunteers on The Experience! 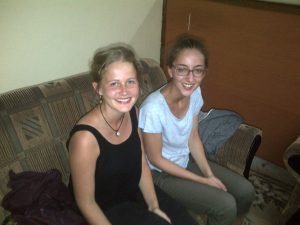 Meet Milena Kettsch (above left) and Flurina Borer (right), young, pretty and guests on the most recent edition of the Chanters Lodge Experience with the Milli Jam Ingredient featuring Jay Hillz. ‘The Experience’ is our weekly radio show airing every Tuesday evening from 20.30 hrs CAT for an hour live on Zambezi 94.1 fm, Livingstone’s leading local radio station. The girls hail from Switzerland, though Milena has a German passport despite never having lived in that country! Daughter of pastors in the Reformed Church some of her early years were spent in Cameroon. Flurina told us she had spent time in Namibia in the past. The girls had met briefly before coming to Zambia some 3 months ago, since when they had become firm friends!

You might be surprised to learn that the girls, both on gap years between high school and university, told listeners that they’d spent the past two months in Kabwe, Central Zambia (Milli Jam’s home town), as volunteers with Comundo, helping out in a hospice for terminally ill patients run by that NGO. I’m not sure at that age I could have done something like that, and the girls agreed that sometimes it had been quite a traumatic experience. The NGO has a childrens’ centre on the same site which they said helped them with perspective in regard to the hospice.

The girls told listeners that after a few more days in Zambia they would set off to travel to Malawi and Tanzania (including Zanzibar). At the end of their travels Milena would be heading for Basel for a degree course in History and Social Anthropology while Flurina would be going to university in Freiburg to study speech therapy.

The girls explained that they had spent the past week at Chanters Lodge for some R&R – they had been recommended to the lodge by a colleague and were happy with their choice. While in Livingstone they had seen Victoria Falls very early in the morning, which they had loved, getting soaking wet in the process! The day of the show they had spent the day in Chobe NP in Botswana which they had also enjoyed, though they were sad not to have seen ‘big cats’.

The music on the show featured tracks from late Prince, Drake, Callum Scott, Skepta, as well as Wezi, OS Detroi, Kantu and Benny Benassi ft Chris Brown. The girls said they had a very wide taste in music including electro and reggae, but particularly liked Coldplay. No interest in football! One of the girls loves to play volleyball the other enjoys hiking in the Swiss mountains. Both girls are still single, Melina’s boy friend will join her in Tanzania, Flurina had ‘no such complications’!