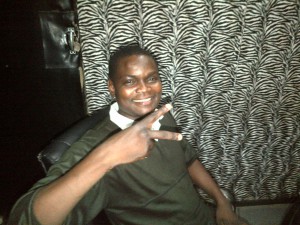 Meet Kawana Lubinda Peter (above), Guest on the first ever Tuesday evening edition of the Chanters Lodge Experience with the Milli Jam Ingredient featuring Jay Hillz which aired on 26th January. The Experience is our weekly radio show on Zambezi 94.1 fm, Livingstone’s leading local radio station, and has been a regular feature since 2007, in the past on Sunday evenings.

Peter told Milli Jam that he had been working at Zambezi fm for the past week in the marketing department. He is a graduate in Mass Communications and is also an agriculturist. He completed high school in Mazabuka – the sugar town – in Southern Province and indeed had his first broadasting job in that town with community radio in 2004. Since then his experience has been such that he believes he can ‘do anything in radio broadcasting’. Milli Jam wondered whether he had also worked in television or print media but Peter said that aspect was still something for the future.

The music on the show was good. We did not feature Peter’s favourite Boys2Men, but did play tracks from AlunaGeorge ft Popcaan, Ne-Yo, Olly Murs and Pet Shop Boys. There was also work from Shenky Shuga ft Che-Che, Justin Bieber, Slap D and the latest from Sigala – ‘Say You Do’. We do our best to help the station keep up with the new tracks in UK and USA.

Peter told listeners that he has been married for nine years and has two boys and a girl. He sent his love to his wife who was listening. He supports Manchester United and said he thought Louis van Gaal should be given more time to bring back success to his favourite club. His favourite all time player – Ruud van Nistelrooy. He had never done the bungee jump but was looking forward to marketing the station to various of the activity companies in Livingstone as well as other corporates.