Phyllis Ng’andu on The Experience! 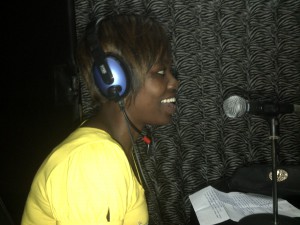 Meet Phyllis Ng’andu (above) guest on the most recent edition of the Chanters Lodge Experience with the Milli Jam Ingredient featuring Jay Hillz, airing every Tuesday night at 20.30 hrs CAT on Zambezi 94.1 fm. Listeners to our show are very familiar with ‘Phyll’, as she likes to be known, being the only full time female presenter employed by Zambezi 94.1 fm at the present time. She told us she is currently involved with show presentation, news reading and production – she obviously loves the job!

Phyll explained that she had, for the most part, been brought up in Botswana, where her dad, an expatriate Zambian, has worked for many years as a radiographer. However she did complete her secondary education back in Zambia at Namwianga Secondary School in Kalomo, some 120 kms north of Livingstone. She also holds a diploma in social work from Evelyn Hone College in Lusaka. “Not exactly social work that you’re doing now” we commented. Phyll explained that she just loved broadcasting! We wondered how she had come to join Zambezi fm, and she explained that this was her second stint with the station having previously been a part time presenter before she went back to school. On completion and her return to Livingstone the station management had demanded her recall and she had been happy to oblige.

A single mother of two year old Mubanga, Phyll told us that she loves house music as well as Zambian music and that her favourite international artist is Adele. “Because of the new album?” Wondered Milli Jam. “No, from way back” replied Phyll. She has never done the bungee jump and didn’t sound too keen on doing so! She supports Liverpool which made Jay Hillz happy! She has two brothers and two sisters of whom she is the oldest. She speaks five languages.