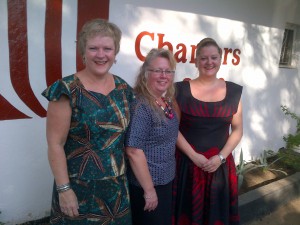 We are always happy to welcome Norwegians as our guests on the Chanters Lodge Experience with the Milli Jam Ingredient featuring Jay Hillz, our weekly radio show airing for an hour live every Sunday night on Zambezi 94.1 fm, Livingstone’s leading local radio station. Over the eight years the show has been broadcast there have been many Norwegian guests. Lene Sivertsen (right), Anita Hind Andresen (centre) and Marianne Olssen (above left) were the latest Norwegian visitors to appear on our programme. For Marianne it was her second time to be with us, but a first for Lene and Anita, and in fact a first time in Zambia for those two ladies.

Lene and Anita told listeners they were from a Norwegian NGO – SMISO – established to fight against incest and sexual abuse in Norway and now largely funded by the Norwegian government. They were in Zambia to liaise with Response Network, a Zambian NGO, based in Livingstone, Southern Province of Zambia, which believes in development that mobilizes people’s own human and environmental resources, as they have seen that self-esteem, knowledge and creativity grow with responsibility. Lene told us that statistics for sexual abuse of young people are remarkably similar across the world – some 9% of girls and 1% of boys aged between 14 and 18. SMISO offers counselling and support to affected youngsters. Marianne told us that she was the facilitator between SMISO and Response Network.

The ladies said they had enjoyed their view of the Victoria Falls but were disappointed there was so little water – they vowed to come back again at an earlier time of year when the Falls were full. They had a two day one night safari planned to Chobe NP in Botswana during their stay which would see them spend a total of about two weeks altogether in Livingstone. They had no intention to bungee jump. They had spent a night in one of the rural villages near Livingstone to observe the rural way of life, had eaten Zambian food and were thoroughly impressed with the warm and welcoming attitude of Zambians wherever they had gone.

On a more personal note, Lene told us that she was in a relationship and had a 19 year old son, currently serving in the Norwegian military, Marianne that she was newly a very proud grand mother, and Anita happily married with 2 children aged 16 and 18. Both Lene and Anita work full time for SMISO. All three ladies live in Tromsoe in the far north of Norway up by the Arctic Circle.

The ladies told listeners that they had been happy and comfortable at Chanters Lodge. With regard to the future they all expressed the opinion that they were pretty happy with their lives as they were and they would be delighted for that situation to continue!