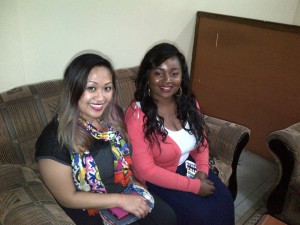 Meet Annabelle Dorion (above left) and Juliette Fombi, students at Howard University in Washington DC, USA, and guests on the most recent edition of the Chanters Lodge Experience with the Milli Jam Ingredient featuring Jay Hillz. ‘The Experience’ is the weekly radio show airing on Zambezi 94.1 fm, Livingstone’s leading local radio station, from 20.30-21.30 hrs every Sunday night sponsored by Chanters Lodge and is a lively mixture of latest international and Zambian pop music interspersed with chat with our guest-of-the-week. We also give listeners social media and pop chart updates.

Annabelle and Juliette told listeners they had been in Livingstone for the past three weeks on internships at Livingstone General Hospital. They are third and fourth year students at Howard studying pharmacy, and their work at the hospital had been based at the HIV/Aids section dispensing medication and offering counseling to patients. They had been accommodated at Chanters Lodge throughout their stay in Livingstone and had been happy at the lodge, it had been comfortable and convenient, they said. The girls actually seemed sorry they would be leaving for home in America in a few days’ time. The work had been an eye opener and they had made friends.

The music on the show was latest and varied featuring tracks from Fuse ODG, David Zowie, Years and Years, Chefy 187, Natalie la Rose ft Fetty Wap, Salma Sky, Olly Murs and ‘Yoga’ by Janelle Monae ft Jinneda. Our pick of the week was by Jake Miller and the closing track from Little Mix

Milli Jam wanted to know if the girls had had time to undertake any of the many tourist activities available in Livingstone and the girls bemoaned just how expensive most of the activities were for students on a budget. However they had enjoyed seeing Victoria Falls and on Annabelle’s birthday the previous weekend they had taken the sunset cruise on the Zambezi which they had thoroughly enjoyed. “No bungee jump?” I wondered. They laughed and said they’d been scared to do that. They had though, enjoyed some leisure time at the various pubs and clubs in Livingstone. They told us they were both single and had ‘no time for boyfriends’. We wondered about this….

Annabelle’s roots are in Philippines and Juliette’s in Cameroon. Living in Washington had they met President Obama? – Annabelle had! We were impressed. Both girls said they loved all types of music and had no real favourite though Juliette loves Nigerian tracks. Annabelle supports Arsenal in England which made Milli Jam happy and both girls were delighted that USA had recently won the Women’s Football World Cup.