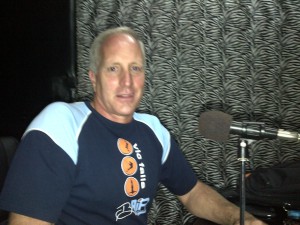 Meet Mark Scarbrough, frequent visitor to Zambia, valued client of Chanters Lodge and once again guest on the most recent edition of the Chanters Lodge Experience with the Milli Jam Ingredient ft Jay Hillz, our weekly radio show airing every Sunday night at 20.30 hrs CAT on Zambezi 94.1 fm. Milli Jam and Jay were very happy that Mark brought them t shirts and hats as well as a very special pair of flashing dark glasses for Jay! I kid you not! I was delighted to be given some Charley Pride CD’s, and for sure Mark is one of the most generous, gentle people you’re ever likely to meet! Mark hails from Oakridge, Tennessee.
Mark told listeners about his latest project to build a clinic and house near Choma in the Southern Province of Zambia, as well as providing a well for the project. Each new project will be branded under the name ‘At Waters Edge’ although the logo and website were not yet finalized. One of Mark’s major undertakings is to identify and rein in corporate sponsors. Mark also has dealings with Karen Wheaton, a seasoned Christian minister whose music and preaching has provoked listeners to pursue God in passionate worship for many years. Karen’s efforts are primarily focused at the Ramp with a view to empowering young people of all races and faiths. Two of the t shirts the guys were given were from The Ramp.

Mark is a divorcee with two daughters and two grand children. He also has a Zambian son Alec, recently married in USA and now proud dad to baby Olivia born in September. “Awwww!” We said! This trip would take him to UK as well as another week or so in Zambia.
Asked where he would like to be and what he would like to be doing in ten years’ time he would like to be with his daughters on the Milli Jam and Jay Hillz radio show! Nice one!