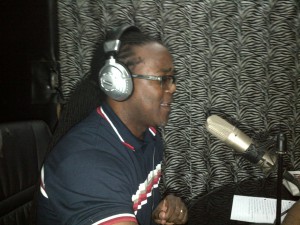 Our guest on the most recent edition of the Chanters Lodge Experience with the Milli Jam Ingredient featuring Jay Hillz was Danny Anakene (above), better known as ‘Danny D’ – his second appearance on the programme though the first was many years’ ago. Danny is the longest serving member of staff at Zambezi 94.1 fm, and is sales and marketing manager, though in the past he has also served as general manager. ‘The Experience’ is our weekly radio show airing every Tuesday evening at 20.30 hrs for an hour live with great international and Zambian music as well as chat with our guest. This show was no exception.

Danny told listeners that he was a local Livingstone boy, having been brought up here and completing his secondary education at St Raphael’s, one of Livingstone’s all boys secondary schools with a good name. After completing Grade 12, Danny had qualified in journalism at Evelyn Hone College in Lusaka after some years of study. During this time he had developed a taste for radio broadcasting with Radio Phoenix, so it was little wonder that in 2006 he was one of the pioneers of local radio in Livingstone, as Zambezi FM hit the airwaves. Although it had not been easy, since then the station had survived and prospered.

The music on the show was great as usual with hits from Jay Sean ft Sean Paul, Drake ft Whizkid, B-Flow, Casper Nyovest, Sam Fan Thomas, Judy and Will.i.am amongst others. Danny said he was still involved in broadcasting despite being in admin at the station and currently had two shows per week, including his famous Saturday morning spot, often featuring country music.

Milli Jam invited a bombshell when half way through the show he asked Danny where he’d been for the past ten months and listeners were shocked when our guest revealed in public that he had been ‘in jail’! Without going into detail as to how he had ended up in that unfortunate situation, listeners were fascinated to hear details of his prison life including overcrowded cells, tough working conditions, sleeping arrangements and food issues. Danny said that it was his spirituality that had kept him strong and he was expecially proud that the authorities had allowed him to keep his dreadlocks which he’d had for 15 years. That was unusual in itself. He had prayed a lot!

During this time he had been treated with respect by the prison staff and was especially grateful to his wife, family and friends for the moral, financial and physical support he had received while incarcerated. He had enjoyed listening to our show while he was inside and had initiated his fellow prisoners into the delights of ‘The Experience’ every Sunday now Tuesday evenings. We surmised that he must be very strong to have survived this nightmare in the way he had, coming out stronger than when he had gone in.

Asked where he would like to be and what he would like to be doing ten years’ from now, Danny said that he hoped to be a media director and to have been invloved in broadcasting outside Zambia. We thanked him for coming on our show and sharing his scary experiences with our listeners.