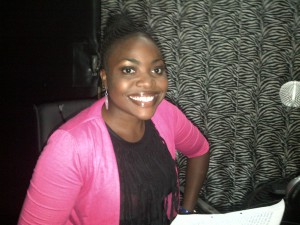 Recently, a lot of the weekly guests on our local radio show have been overseas visitors staying at Chanters Lodge, so it was nice for a change to welcome local personality Florence Zoe Shoko (above) on to the most recent edition of the programme. The show’s called the ‘Chanters Lodge Experience with the Milli Jam Ingredient featuring Jay Hillz’, and it airs every Tuesday evening for an hour live on Zambezi 94.1 fm from 20.30 hrs CAT. It’s a great mixture of chat with our guest together with some of the latest international and Zambian pop tracks chosen by Milli Jam, Jay and myself.

Florence was educated at Roma Girls in Lusaka and St Mary’s Secondary School in Livingstone after which she took up a position in sales and marketing with a company in Lusaka. Her parents are retired and farming. One of seven siblings, Florence told us that she is currently undertaking a course in IT locally in Livingstone with a view to eventually qualifying in Mass Communications. She was loving the course. From July last year to January this year she had been a hostess on Livingstone Island, working on contract for Tongabezi Lodge. As you may know, Livingstone Island and Devil’s Pool are only open during the months of the year when the water level in the river is low, so most of the workers are just employed for the season. Devil’s Pool? Yes, where you can safely swim just a metre away, as millions of gallons of water rush over the edge of one of the world’s biggest water falls! A rush? You bet!

The music on the show was good with tracks from Tinie Tempah featuring Zara Larsson, Mike Posner, R City, AlunaGeorge ft Popcaan, Macky 2 ft Ephraim, Zayn, Jay Rox and Kanye West ft Chris Brown. Florence told us that she loves gospel and worship music, and is in fact part of an all girl singing quintet called ‘Alabaster’ specializing in gospel and worship. The girls were not recording right now as some were based in Lusaka, others like Zoe in Livingstone. They hoped to be back together, singing and recording again soon.

Meanwhile our guest had been involved in broadcasting with Zambezi fm from time to time, thanks to an initial contact with Kay Jay de Souza. JayHillz told us that Florence had been his guest on that morning’s breakfast show and the response from listeners had been ‘overwhelming’. “It would have been even more so if they could have seen her as well as heard her” I said. She told us that she is ‘very much single’. She is active on Facebook and listed her hobbies as ‘talking, reading and dancing’!